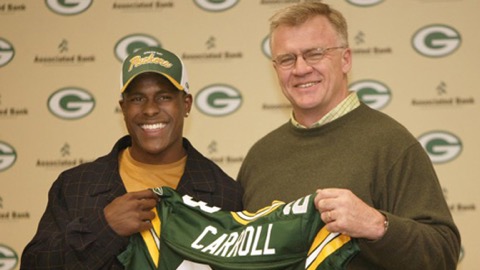 Do we remember when this happened? Somehow, we do not.

That may be because we’ve tried to forget everything about Ahmad Carroll.

For those of you who don’t remember this turd, he was the Green Bay Packers’ first-round pick in the 2004 draft. He was a cornerback from Arkansas and entered the draft after his junior season.

There were those who suggested that, had Carroll remained in school for his senior season, he would have been a top 10 pick in 2005. That’s because he had speed to burn. Carroll also competed for the Razorbacks track team as a sprinter.

I remember thinking at the time, “Oh, fuckin’ sweet! We got a steal then!”

Unfortunately, Carroll was anything but a steal.

In fact, you could argue that he was the final nail in Mike Sherman’s coffin. At least as a general manager. Sherman, who it turns out was an awful GM, was replaced by your boy Big Ted in 2005. Big Ted would relinquish Sherman of his coaching duties a season later.

But this about a shitdick named Ahmad Carroll.

The Packers were hard up for corners in 2004, so they drafted Carroll in round one and another cornerback, Montana State’s Joey Thomas, in the second round. And this story has come back to the forefront because the Packers did the same thing in this year’s draft. ASU corner Damarious Randall in one. Miami (OH) corner Quiten Rollins in two.

But those guys are buddies.

Carroll and Thomas were not.

Following an early-season loss to the Bears (in what would turn out to be a 4-12 season), Carroll and Thomas got into it. Not on the field, but in a meeting.

The altercation caused Thomas to miss the following week’s game against the Colts.

This is from a report by our pal Rob Demovsky, post-incident.

The two rookie cornerbacks got into a scrap following a defensive backs meeting last Monday, the day after the Packers’ Sept. 19 home loss to the Chicago Bears. When the verbal sparring continued outside the meeting room, Carroll jumped Thomas and the two had to be separated.

Sherman really had a handle on that team, didn’t he?

Not surprisingly, both of these idiots turned out to be busts. Thomas played only a season and a half for the Packers, started just one game and had no picks. Carroll lasted only two and half seasons with the Packers and recorded a whopping three picks.

Despite his speed, Carroll was a highlight waiting to happen… for the opposing team. The only thing we can remember of him, other than being a bust, is how often he got beat deep.

But hey, now we’ll remember how he once beat up Joey Thomas in a meeting during the glorious 2004 campaign!