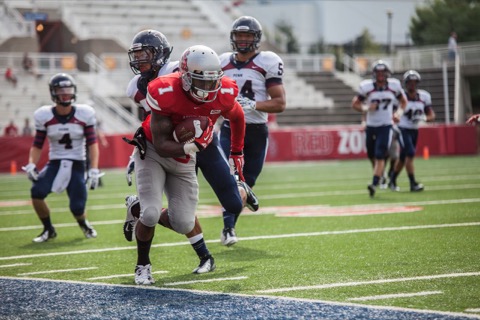 If you’re the kind of person who really wants to get excited about an undrafted free agent, then this is sure to make you excited about Green Bay Packers receiver Adrian Coxson.

Former Baltimore Ravens receiver and Coxson’s offseason training partner, Qadry Ismail, is comparing Coxson to Terrell Owens and Anquan Boldin. And before you point out that Owens is a complete and total douche, we’ll mention that Ismail made a point to say he’s Owens without the attitude.

So what’s the deal with this guy?

He originally went to Florida, but transferred back home to Maryland to take care of his father before ever playing a down for the Gators. Coxson would play the majority of his college ball (three years) at Stony Brook, an FCS school on Long Island which is not exactly known for its passing game. As such, you won’t be wowed by these statistics — 82 catches, 1,335 yards and 10 touchdowns.

And that’s for all three seasons at Stony Brook.

Boldin is the same height, 10 pounds heavier and not nearly as fast.

So imagine a faster version of that shitbrick.

Either way, the Packers have got themselves a big, solid kid with a ton of speed.

That’s definitely intriguing, but before anyone goes and hands Coxson a roster spot, they should consider this.

The Packers currently have 12 receivers on their roster and they’ll end up keeping five or six. Barring some sort of season-ending injury, four of those spots are already locked up by Jordy Nelson, Randall Cobb, Davante Adams and third-round pick Ty Montgomery. So the eight remaining guys are competing for one or two roster spots.

Coxson or anyone else will have to beat out 2014 draft picks Jared Abbrederis and Jeff Janis, as well as Myles White, who’s been hanging around the bottom of the Packers’ roster since 2013.

It isn’t as if those odds are insurmountable, but they’re certainly not great.

On the plus side, Coxson has the physical gifts that none of other guys who will be battling for a roster spot do.

Previous Article
Eddie Lacy is the No. 1 Fantasy Player
Next Article
Surprisingly, Someone From Minnesota Has a Stupid Idea