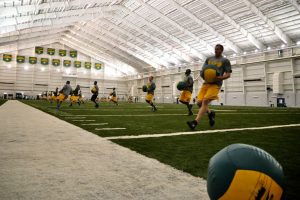 These workouts are voluntary. However, the Packers typically lead the NFL in workout bonuses awarded and have nearly $5 million to shell out this year. Already rich dudes- Aaron Rodgers, Julius Peppers, Jordy Nelson, Clay Matthews and Sam Shields- will all collect a cool half mil for showing up and lightly participating. Randall Cobb, Josh Sitton, and Morgan Burnett get nearly as much and lead the list of seventeen other guys who will receive bonuses for participating in the workouts.

The bonuses pretty much assure that the majority of the impactful portion of the roster will be together today for the first time since packing up and leaving the locker room after the disastrous NFC Championship Game in late January.

Here is the entire offseason schedule.

Also, the entire NFL Schedule for 2015 is going to be revealed by the NFL Network tomorrow night. We already know who the Packers are playing and where, but the schedule will tell us when and in what order.