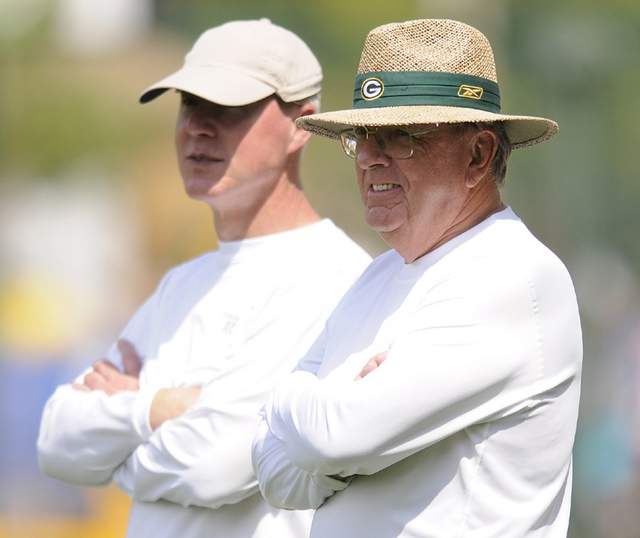 Before we continue our 2015 Packer Draft series by taking a hard look at who the Packers may end up drafting in the first round, let’s take a step back to consider past drafts. Admittedly, whether deserved or not, Ted Thompson is not known for his first round selections. Whether that is because his first pick as GM will always be his best, or because of unrealistic fan expectations for the first round (cough!), or because of a few well-ostracized busts, or because that is a fair evaluation when compared to other GMs, we can only guess it is a combination of all that.

One thing I can tell you with near empirical certainty is that it isn’t because of a comparison to Ron Wolf.

Ron Wolf will be entering the NFL Hall of Fame this August. Deservedly so, not only for Wolf’s miraculous work with the Packers but also for his long tenure with the Oakland/LA Raiders.

By the way, when do we get a street or a building around here named for Ron Wolf? Seems like a reasonable question. My referendum to have Day Street renamed Mike Sherman End appears stuck in committee. Certainly Ron Wolf deserves something better.

Anyway, though there is no questioning Ron Wolf’s place among great NFL GMs, Wolf’s ensemble of first round selections holds a striking resemblance to Thompson’s own.

On average, Ron Wolf selected around #20 overall in the first round. Ted Thompson has selected at spot #21 on average. That not only suggests similar team results during his tenure, but it also means neither GM has really had any advantage in regards to where in the first round they were picking.

In the column headed “Stars,” I have attempted to insert a qualitative measure for each pick. To minimize the subjectivity of evaluating each player, I have only used a 4 star scale. 1 star is a bust. 2 stars is a bonafide NFL starter, but not a great player. 3 stars are for Pro Bowlers or consistently above average players. 4 stars is for your special, Hall of Fame class player.

As you can see, both GMs mostly drafted players falling in the 2 star category. Some NFL fans seem to think that any player taken in the 1st round should be a 3 or 4 star player. By that measure, both GMs have selected mostly busts. Obviously, I do not subscribe to that theory. A perusal of the last 5 drafts shows that about 30% of the players taken in the 1st round become Pro Bowl to All Pro type players. About 30% become busts. The other 40% are just reliable NFL starters, or what I call a 2 star player.

Wolf selected three busts, by even the most generous measures, in John Michels, Antuan Edwards and Jamal Reynolds. So, far Thompson has drafted two by the same measure in Justin Harrell and Derek Sherrod. That makes both GMs a little better than the 30% first round bust rate. Of course, there is still time for Nick Perry, Datone Jones or HaHa Clinton-Dix to be deemed busts.

Injuries are obviously the biggest factor in a first round pick becoming a bust. In fact, I would say all the busts taken by both GMs were probably 2 star players who simply got injured. Jamal Reynolds would be the exception. He didn’t need an injury to bust.

Ron Wolf selected one 3 star player in Bubba Franks. Believe it or not, Franks was selected to three Pro Bowls, which is why he gets the 3. Otherwise, yes, I would agree that Bubba was more like a 2 star player than a 3. Of course, Wolf traded a first round pick in 1992, the 19th overall, for Brett Favre. If you count Brett, then Wolf selected one 4 star player as well.

So far, Ted Thompson has done the same. He has drafted one 4 star player in Aaron Rodgers and one 3 star player in Clay Matthews. However, whereas all of Wolf’s picks have completed their careers, the same is not the case for Thompson’s. There is still time for Matthews to become a 4 star player, and for Bryan Bulaga or HaHa Clinton-Dix to be 3 star players.

However, the final column of the table is where the biggest difference between the GM and their picks is shown. Amazingly, Ron Wolf never extended ANY of his first round picks, not counting Brett. Bubba Franks was the only first round draft pick of Wolf’s to receive an extension from the Packers, and he was actually extended by Mike Sherman.

Side note: Wayne “Mad Max” Simmons was briefly extended by Wolf, but he was then traded 6 games into the extension. So, same difference.

Apparently either Wolf didn’t think too much of his picks by the end of their rookie contract, or he preferred to replace them with other market options. A few of Wolf’s picks did go on to have decent careers with other teams – Terrell Buckley as a slot corner, Vonnie Holliday and Ross Verba, but none of them other than Brett and Bubba had long-term futures with the team.

Quite the opposite is the case with Ted Thompson. The only first round picks not extended by the Packers are the two busts – Harrell and Sherrod – for whom injuries had the most to do with their being cut by the team. Otherwise, the organization’s commitment to “draft and develop” is clear. Once a player has been “developed,” Thompson is clearly loath to let them walk.

The only conclusion that can be derived from those numbers is that Ted Thompson is just as good, if not better, when picking in the first round than Ron Wolf was. So, if you think Ted Thompson isn’t very good at it, then neither was Wolf. Of course, we can argue that Wolf didn’t have to be because he played in free agency, and played well. That is probably true, but for one, free agency was an incredibly different animal back then and two, teams built on free agency have the tendency to age and decline rapidly. The Packers are looking to do neither.