The Green Bay Packers 2015 schedule came out on Tuesday. Now that we know when and where, we can obviously predict exactly what’s going to happen.

Week 1 @ Chicago Bears
You know, if the Packers could play the Bears every week, well… 16-0. The Bears have remade their awful defense with a bunch of mediocre free agents. They have a new coach whose teams like to choke in the playoffs. That coach won’t have to worry about that this year, though. As long as the Bears have Packers legend Jay Cutler, this is a Packers win. (1-0)

Week 2, Seattle Seahawks
Are the Packers going to be a better team than Seattle in 2015? We would be awfully disappointed if they aren’t. However, Mike McCarthy’s bunch always starts slow. So that means that they’re losing two of their first three regardless of who they play. They’re obviously not losing to the Bears, so this is a loss right here. After the game, we will hear tales of pad level. During the game, Clay Matthews will have a phantom hamstring pull and then stand around on the sidelines rubbing his vagina for three quarters. Meanwhile, Marshawn Lynch runs for a buck fifty. (1-1)

Week 3, Kansas City Chiefs
Alright, we’re going to have to switch this up a little bit. The Packers aren’t losing two prime time games in a row at home. The NFL schedule makers have set it up so it’s pretty much impossible for the Packers to get off to their customary 1-2 start. Look, the Chiefs are going to be okay, but that’s just it. They’re not bad like the Raiders. They’re not good like New England. They’re just in the middle there. Clay Matthew miraculously returns from his vagina injury to help shut down Alex Smith and the boys. (2-1)

Week 4 @ San Francisco 49ers
Last year was weird. Where was the Packers’ annual loss to the San Francisco 49ers? Well, the 49ers weren’t on the regular season schedule and weren’t quite good enough to make the playoffs, so that annual loss took a hiatus for a year. But the 49ers are back again! Now they have a dumber, but more laid back coach and they’ve lost a couple defensive stars to retirement. None of that matters though. Dom Capers can only shit himself when he sees the 49ers offense. “Dom, do you think you’ll be able to figure out how to stop San Francisco this time around?” Silence… [fart noise]. (2-2) 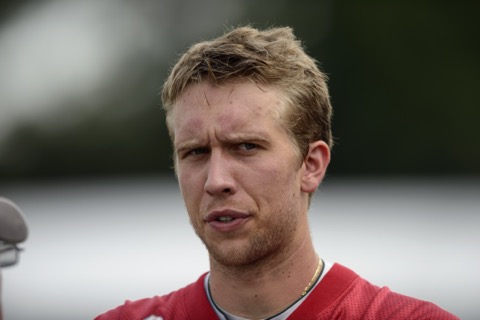 Week 6, San Diego Chargers
San Diego. Superchargers! As much as I like that fight song (or whatever it is), Phyllis Rivers and the gang are just another one of those mediocre teams like the Chiefs. It’s going to be fun to watch Phyllis and Aaron Rodgers sling it around Lambeau Field, but there’s no reason the Packers shouldn’t handle these clowns at home. (4-2)

Week 8 @ Denver Broncos
A lot of people are probably looking at this game on the schedule right now and they’re like, “Ohhhhhhhhh! The big, bad Broncos. That’s going to be a tough one!” Maaaaaaaaaan, fuck the Broncos. First, the Packers always play well coming out of the bye week. They should probably thank the NFL schedule makers again for giving them this game at this time. Second and more importantly, I think Mr. Regular Season Champion, Peyton Manning, is done. Great players always stick around a year or two too long. The Packers are going to roll these pricks. (5-2)

Week 9 @ Carolina Panthers
Here’s a game I really don’t like. The Packers are going from Denver to the other side of the country to face what will likely be the best team in the NFC South. From playing a bunch of old farts to a team that’s young and hungry. From a stationary target to a mobile quarterback. Yeah, there’s really nothing to like about this game. (5-3)

Week 10, Detroit Lions
The Detroit Lions had their chance. That chance was last year. Or maybe it was the year before. Actually, it was both. And in true Detroit Lions form, they fucked it up both times. This year’s Lions will not be as good as either of those teams, simply because their defensive line isn’t as strong. The good news is, no one on the Packers should have to worry about getting stomped, stepped on or kicked in the balls. Rot in hell, Ndamukong Suh! (6-3)

Week 11 @ Minnesota Vikings
This team is going to be hard to peg until we figure out what’s going with Child Abuse Peterson. Do they keep him or do they trade him? For now, we’ll assume the Vikings are going to keep him and that makes them at least somewhat formidable. Beyond that, what we are now and always will be certain of is the Vikings and their fuckface fans are the garbage of the NFL. Unfortunately, the Packers are probably due for a loss to those shitstains. Might as well take it here. (6-4)

Week 14, Dallas Cowboys
The league did the Packers another favor with this game. Those two previous games are Thursday games. So the Packers will have a few days off following their win over Detroit before beginning preparations for the Cowboys. Dallas gave the Packers all they wanted in the divisional round at Lambeau last season. Yes, we know DeMarco Murray is gone, but Bill Murray could gain 1,000 yards behind that offensive line. What we’re saying is, there’s no reason to believe the Cowboys won’t be solid again this season. Tough game, but at Lambeau and with rest, it’s a W. (9-4)

Week 15 @ Oakland Raiders
This will be great for the Packers because they’ll get to see old friends like Charles Woodson and James Jones. Then they’ll get to kick the team that those guys play for all over the football field. Seriously, wake me when the Raiders are relevant again. (10-4)

Week 16 @ Arizona Cardinals
This is a team we have no idea what to make of at this point. They were great for a large portion of 2014, but collapsed down the stretch. That collapse was due to the fact that every quarterback they sent onto the field immediately suffered a season-ending injury. So, there’s still a good team here when healthy. We also think Bruce Arians is one of the best coaches in football. Let’s assume the Cardinals enter this game with someone other than Matt Flynn under center. The Cardinals have the kind of defense that can make Aaron Rodgers look off. (10-5)

Week 17, Minnesota Vikings
We already gifted these assholes one victory in 2015. We won’t be gifting them two. (11-5)

Clearly, the Packers will be winning the NFC North. Will they be securing home field in the NFC? Probably not at 11-5. Someone will go 12-4. The Packers did gain some much-needed experience in the playoffs last season though. Frankly, we are not concerned about home field. This team can go anywhere and beat anyone.