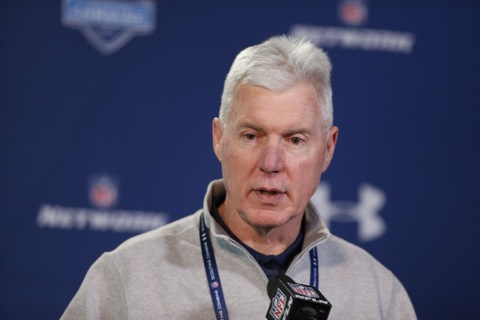 Trader Ted may strike again before the day is over. The Green Bay Packers are reportedly interested in trading out of the first round of the NFL Draft.

Ian Rapoport suggests Jacksonville may want to trade into the last part of the first round by dealing their second-round pick (No. 36) and another pick. If that scenario comes to fruition, the Packers would be dropping six spots and picking up an additional draft choice.

Pats, Packers want to trade back RT @AroundTheNFL: Jacksonville Jaguars could trade up into late stages of 1st roundhttp://t.co/RPIns6mntd

You know, because we want quantity, not quality! One of these guys is bound to be good five years from now!

Seriously, if there’s no difference between the 30th-ranked guy on the Packers’ draft board and 36th-ranked guy, then what the hell? I know we all want to see a shiny, new first-round draft pick tonight, but go ahead and trade out, if that’s the case.

Thompson sucks at choosing guys in the first round anyway. The only really good first-round picks he’s made in 10 years are Aaron Rodgers and Clay Matthews. There are just as many out-and-out busts — Derek Sherrod and Justin Harrell — and soon-to-be busts — Nick Perry and Datone Jones.

Thompson has, frankly, been much better in the second round. Jordy Nelson, Greg Jennings, Eddie Lacy, Casey Hayward, Randall Cobb, Davante Adams and Nick Collins were all second-round picks made by Thompson.