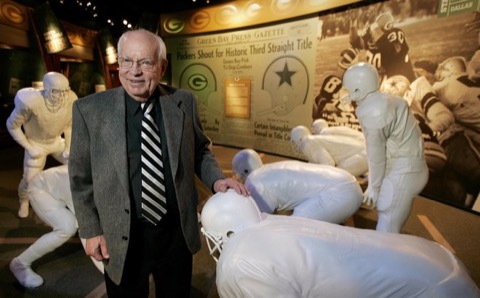 Many of you probably don’t know who Lee Remmel was.

I can best sum him up as the only guy who knew more about the Green Bay Packers than me and maybe Eric Goska.

Remmel covered the Packers for the Green Bay Press-Gazette from 1945 to 1974. In 1974, he moved into Lambeau to handle the organization’s public relations. He held that job until 2004. He was then named team historian, a position he held until he retired at the end of 2007.

Remmel had a crazy and encyclopedic knowledge of Packers history.

I personally remember him when he was much more in the public eye — in the 1980s and ’90s. During that period, one of the local Green Bay stations produced some sort of amateur-looking Packers pregame show that aired every Sunday morning before the network pregame shows.

Remmel was featured in a segment each week where he’d whip out some totally obscure fact about a game played long ago. And if you were a kid like I was watching this stuff in the 1980s, you were like, “Wow. The Packers were actually good at some point? That’s awesome!”

Remmel is one of the few contributors in the Green Bay Packers Hall of Fame.

He died on Thursday at the age of 90.