Here are the Rest of the Packers Pre-Draft Visits 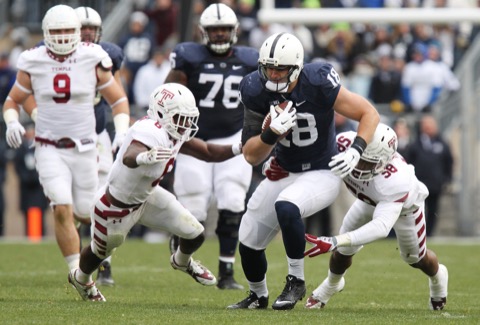 We’ve talked about a number of the Green Bay Packers pre-draft visits already.

You can go here, here and here to see those summaries. These are the guys who’ve been in town that we haven’t discussed. Like the majority of their brethren, they’re guys who are most likely going to go undrafted. But at least they got an all-expenses paid trip to beautiful Green Bay, Wisconsin out of the deal.

Quarterback Ryan Williams, Miami. Having Williams in for a visit wasn’t nearly as eyebrow-raising as when the Packers had Baylor QB Bryce Petty in. Williams hardly played in college. He was in the mix to be the Hurricanes starter in 2014, but tore up his knee that April. In his career at Miami, he attempted just 52 passes. As a freshman at Memphis, Williams threw for 2,075 yards, 13 TDs and 10 picks. He’s got the prototype size at 6-4, 215, but he certainly isn’t quick, having run a 4.97 40. Williams totally seems like the kind of guy who makes Ted wet. Who wants to bet the Packers sign him, thinking they are just the team to develop this hidden gem?

Fullback Aaron Ripkowski, Oklahoma. The Green Bay Packers need more fullbacks. Never mind that they barely use the one they have. It’s time to get back to those heady days when we had three fullbacks on the roster. Because you can NEVER have enough fullbacks! Ripkowski’s 2014 stats: six carries, 13 yards, four touchdowns. Bam! Seriously, and more importantly, Ripkowski is 6-1, 238 and ran a 4.7 40. He’s considered the top fullback in the draft, which means he’s maybe, just maybe, a seventh-round pick. And look, his name is Ripkowski. What better salt of the earth name than Ripkowski to play fullback for the Green Bay Packers? Then, when the Packers release Kuuuuuuuuuuuuuhn!, you can just turn to yelling Riiiiiiiiiiiiiiiiiiiiiiiip! without missing a beat. The Packers marketing department is all over that shit!

Receiver Jordan Leslie, BYU. This dude is fast, having run a 4.4 40. He caught 55 balls for 779 yards and six TDs in his lone season at the Y. Prior to that, he played for UTEP, where he recorded 125 catches for 2,015 yards and 15 touchdowns in three seasons. Leslie is a big play waiting to happen. He averaged 19.1 per catch in 2012 and had four catches of 60 or more in 2013. Surprisingly, Leslie didn’t return kicks in college, but you can bet the Packers would try him there if he lands in Green Bay.

Receiver Adrian Coxson, Stony Brook. Here’s another one of the 85 receivers from schools you’ve never heard of that the Packers have brought in. Because Ted will find the next Jerry Rice! Not by drafting him, but by signing him for dirt after the draft. Because Ted is just that smart and cunning! Anyway, Coxson had 84 catches for 1,335 yards and 10 touchdowns in three seasons at Stony Brook, which is a Football Championship Subdivision school. That’s not terribly impressive, but this guy has gotten plenty of visits because he ran a 4.47 40.

Tight end Jesse James, Penn State. What’s this? A guy who might actually get drafted. Yes it is. James could go as high as the third round and for good reason. He’s a beast at 6-7, 261 and he a ran a 4.69 40. The stats aren’t really there — James had 78 catches for 1,005 yards in three seasons, but who cares? D.J. Williams had stats and where is he now? On a scrap heap somewhere. The Packers kicking the tires on this guy is a sign that they’re not exactly sold on DickRodge. And why should they be? That guy was garbage last season.

Tackle Blaine Clausell, Mississippi State. Clausell was a three-year starter for the Bulldogs at left tackle. He’s 6-6, 329. While all of that may sound impressive, this guy is about the 30th-rated tackle in this draft class. There’s virtually no information available on him. A lot of people obviously don’t like a lot of things about his game. The Packers need another Derek Sherrod though. This time, hopefully they don’t pick him in the first round.

Linebacker Tony Steward, Clemson. Steward had 58 tackles (10 for loss) and 3.5 sacks while playing weak side linebacker for Clemson in 2014. He projects as an inside linebacker in the pros. Steward is 6-1, 241 and ran a 4.64 40. Nothing terribly impressive here, but hey, maybe he’s your next Nate Palmer.