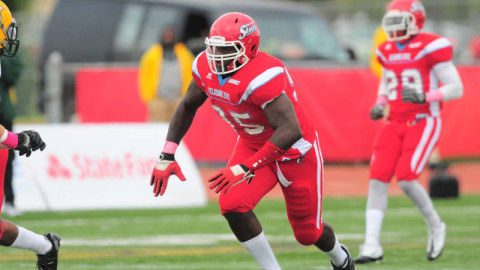 Because that’s what most of them are. Guys who aren’t going to get drafted. If Ted had his way, the Packers would just pull out of the draft and build a roster entirely of undrafted free agents.

In five years, four of them will actually be worth a shit.

Anyway, here are the latest additions to the all-star squad that’s visiting Green Bay (read about the rest here and here).

New Hampshire receiver R.J. Harris. You see, the Packers will be signing a receiver as an undrafted free agent. He will have played at a college you’ve never heard of. So, Harris tore things up at New Hampshire, which is an FCS school, by posting three consecutive 1,000-yard seasons. As a senior, he led the subdivision with 1,551 receiving yards. He was second with 100 receptions and third with 15 touchdowns. He ran a 4.52 40.

Delaware State defensive tackle Rodney Gunter. There’s a Delaware State, huh? That’s right, folks! Big Ted will search every nook and cranny for the next John Jurkovic. DSU is another subdivision school. Gunter is 6-4, 305 and ran a 4.78 40. He can also dunk a basketball. Pretty athletic for a wide body. As a senior, Gunter had 57 tackles and seven sacks.

Houston defensive tackle Joey Mbu. Mbu was actually a first-team AAC player in 2014, when he posted 31 tackles and 2.5 sacks. Don’t let that fool you, though. Mbu probably isn’t getting drafted. He’s considered an effort player. Doesn’t really have any of the physical gifts, but tries real hard. His lack of quickness is evident in his 5.54 40 time. Of course, he’s 6-3, 313, so if he isn’t asked to do anything other than take up space, he’ll be just fine.