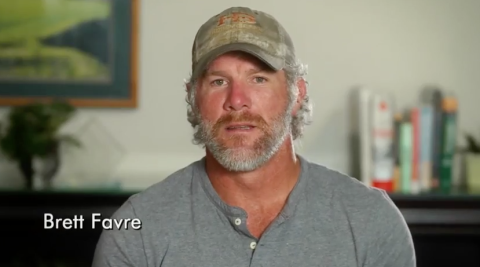 What do a bunch of former Green Bay Packers have to do with golf?

Not much, other than they maybe play a round now and again.

What do they have to do with the PGA Championship?

Unless that event is being held in Wisconsin, as it is this year. Then it’s fair game to drag out all kinds of former Green Bay Packers for promotional purposes.

So that’s what the PGA Championship did.

They’ve got Sterling Sharpe, who’s the only one of these guys that looks like he actually golfs; Charles Woodson, who’s now a Raider, but that’s not at all important here; and Brett Favre, looking like he just returned from a wilderness retreat where personal grooming was forbidden.

Bus: “Hey Brett, the PGA Championship wants you to shoot something for their event.”

Brett: “As long as I don’t have to wash, shave or change my clothes.”

Bus: “I’ll make them write it into the contract.”

Previous Article
Will Someone Please Take this Jay Cutler Autographed Ball?
Next Article
Sam Dekker Showing Off His Arm for Aaron Rodgers