Demetri Goodson: I’ll be your Huckleberry.

by Shawn
in Uncategorized
6 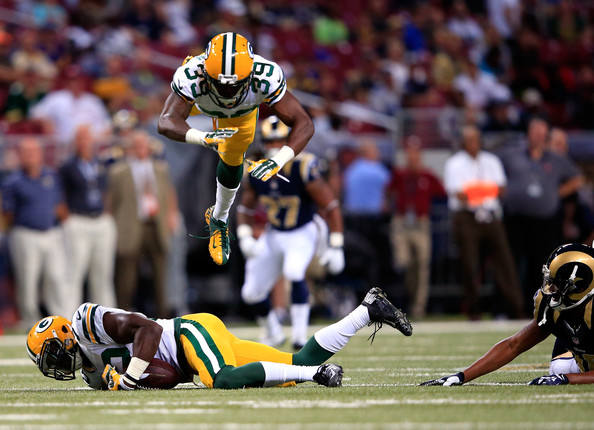 More pressure probably sits on the shoulders of Demetri Goodson than on any other 6th round pick in recent memory.

Most guys picked in the sixth round get a 2-3 year audition with the team. If they can’t make the starting lineup or be a solid special teams contributor within that time, then they are cut with pretty much zero fanfare. General managers don’t take heat for cutting their sixth round picks. It is normal.

If that sixth rounder showed anything at all, he might get a tryout with another team, or he might get a chance with a team that wanted to draft him in the first place and missed out. However, the chances of lasting on a second team are even slimmer than making it with the original.

The Packers right now have two sixth round picks that have lasted past their 2-3 year audition- Mason Crosby and James Starks. They have one past sixth round pick who is still playing for someone else- Jarius Wynn. Props to him. And, of course, Nate Palmer, drafted in 2013, is entering the third year of his audition. The clock is ticking and about to strike midnight.

So, if Demetri Goodson is not on the team two years from now, then it should be par for the course, but it won’t be.

The source of the pressure on Goodson is two-fold. First of all, Goodson is viewed, whether accurately or not, to have been kept over Jumal Rolle. Ted Thompson risked Rolle on the practice squad last year and protected Goodson by keeping him on the 53 man roster. This surprised some since a concussion kept Goodson out of most the preseason while Rolle played well.

When Rolle was offered more money and a promotion to the active roster of the Houston Texans, the Packers were alleged to have been willing to match. However, liking his chances of starting on the Texans, Rolle took his talents South.

It was a good choice for Rolle since he managed to get on the field for 10 games, though he never started. Showing yourself capable of playing for the Houston Texans isn’t exactly a sign of impending greatness, but Rolle has at least shown himself worthy of being on the field and that is more than Goodson has done so far.

Secondly, the free agency departures of Tramon Williams and Davon House has raised the pressure on everyone in the secondary for the Packers. While this may be good news for Goodson, it also puts a spotlight on him, along with Casey Hayward. The Packers need the guys in the secondary to step up, and not later, they need it now.

Well, with the team’s first OTA just a month away, Goodson is at least saying the right things. In a recent interview, Goodson said he has every intention of becoming a starter with the Packers. During 11-on-11 drills, Goodson claims to have picked off Aaron Rodgers six or seven times, usually while covering Jordy Nelson for the scout team. He says he improved as the season went on, and he wants to make the big plays in the big games.

Goodson is alleged to be the second fastest player on the team, behind Sam Shields, with a 4.4 40 time. His 37 inch vertical is also reminiscent of Shields while he is probably about an inch taller.

While his athletic ability is there and is probably why he was kept on the roster, Goodson has yet to prove he has the ball-hawking skills of Shields, who was a receiver in college. However, Goodson’s pedigree as a college basketball player and his reported performance in 11-on-11 drills are a good sign. Now, Goodson just needs to show it on the football field.

Right now Packer Nation says- You’re a daisy if you do.

Packers’ Special Teams to Get Rebuild

Packers' Special Teams to Get Rebuild