When Will You Learn Never To Question Aaron Rodgers? 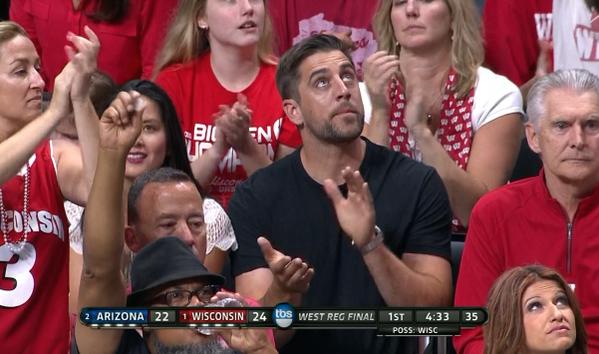 Mr. Thick Skin himself, Aaron Rodgers, took it upon himself to call out some guy publicly who questioned him, last night.

Apparently, the guy’s issue had to do with the fact that Rodgers, who was at the Staples Center watching the UW-Arizona game, waltzed down to the court after the game. There may also have been some butt hurtness about Rodgers not granting someone an interview, but that’s less clear.

First, here’s how things got started.

Dear Wisco fan: If it was about the Badgers, then why was A Rodgers on court? Credentialed media only.

Yeah, that’s pretty much what Rodgers thought. I mean, the graceful thing to do here is ignore the chatter because who gives a shit?

But you know Rodgers can’t do that. He’s obviously been taking lessons on dealing with detractors from his old lady.

To the biggest twitter crybaby of the night, I had a pass to be on the court. Send your complaints to the A.D. #quitcrying #youreajoke

Also with interview requests, sometimes the answer is yes and sometimes it's no. I'm not there for u, I'm there to support my friends n UW.

As you can probably guess, we’re not fans of this prima donna bullshit. Let it go and move on.

You’re Aaron Rodgers. You pretty much get to do whatever the hell you want to do. Some people aren’t going to like that. Most people will just accept it.

But to get all huffy about it publicly? What are you, seven?

Here’s the one time where you could afford to emulate Jay Cutler a little bit.

Packers Have an Agreement with Letroy Guion

Packers Have an Agreement with Letroy Guion