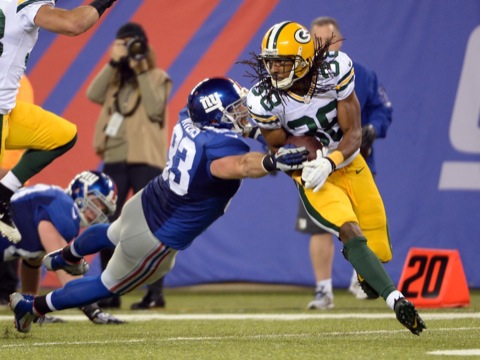 The Saints appear to be the most serious suitor for Williams yet. He’s visiting New Orleans Tuesday night.

This development presents the very real possibility that the Green Bay Packers could lose both of their free agent cornerbacks. Early Tuesday, career backup Davon House signed a ludicrous deal with the Jacksonville Jaguars that averages $6.25 million a year.

Although the Packers have offered Williams a deal (two years, $8 million), he has rejected it. Word is, Tramon wants a third year and a good deal of guaranteed money.

We’d say he can have one or the other. Not both.

Even if they lose Williams, the Packers aren’t out of options just yet. Slot corner Casey Hayward insists he’s capable of playing outside. However, based on his god-awful tackling ability, we might disagree.

There are a couple intriguing free agents available as well.

They are Darrelle Revis and Brandon Browner, both of whom played for the Patriots last season.

You’re laughing at the notion of Ted Thompson signing an outside free agent, especially a big ticket one like Revis, we know.

Well, get ready to clean out your drawers!

Four teams in running for Revis besides the #Patriots: #Jets, #Packers, #Steelers and mystery team.

That doesn’t mean the Packers will actually do anything besides express interest and then sit around with their thumbs up their asses, but I think we can all agree. Darrelle Revis would make a nice replacement for Tramon Williams.