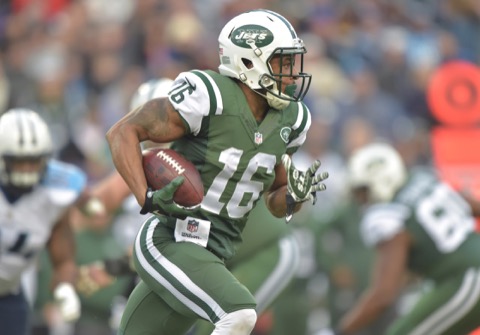 That means the Packers need a slot receiver, unless they feel like 2014 draft picks Jeff Janis or Jared Abbrederis, who’s coming off a torn ACL, can fill that role.

Harvin, who was traded from Seattle to the Jets during the 2014 season, is going to be released by New York. The Jets just acquired Brandon Marshall from Chicago and they signed Eric Decker last offseason. Harvin’s contract is bigger than both of those guys, which means he has to go.

Harvin has been in the league seven seasons and he’s been through three teams. That’s a clear signal there’s something not quite right in his head. He’s also never had a 1,000-yard receiving season and he hasn’t played in more than nine games in a season since 2011.

Is he a head case? Possibly. Is he injury-prone? Maybe.

Harvin also has all the talent in the world. In the right environment, he just might reach his potential.

The guy is almost a carbon copy of Cobb.

Well, don’t get too excited. We are counting on Ted Thompson to make a bold move here.

That being said, kicking the tires on Harvin makes a lot of sense if the Packers lose Cobb.

The primary factor that makes it sensible is money. Harvin is going to come a lot cheaper than Cobb because of the baggage he’s carrying around. Our guess is about half of what Cobb will cost. And you know Big Ted loves a bargain!

The Packers have taken chances on guys with baggage in recent seasons. Johnny Jolly and Colt Lyerla come to mind. All indications are the Packers are also high on re-signing recently-arrested defensive tackle Letroy Guion this offseason.

Green Bay actually seems like a perfect fit for Harvin to resurrect his career and the Packers are most likely going to have a glaring hole on offense next week.