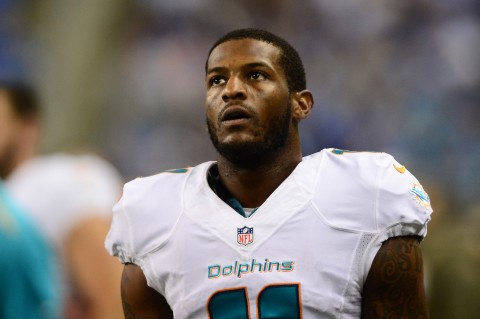 Much like the Detroit Lions, who can’t get anyone to sign with them, the Minnesota Vikings took the alternate route. Make a trade, so the guy in question doesn’t have a choice but to play for your crappy organization. So the Vikings went out and traded for receiver Mike Wallace.

Because Mike Wallace is THE ANSWER!

The Vikings gave the Dolphins a fifth-round pick for Wallace and a seventh.

If you recall free agency two years ago, Wallace was the prize. He was coming off 64 receptions and 836 yards with Pittsburgh. He had gone over 1,000 yards in each of the two previous seasons, with a total of 18 touchdowns during those two years.

So, naturally, Miami gave him a huge contract.

The Vikings will now inherit that albatross.

They’ll also inherit a guy who caught 67 balls for 862 yards and 10 touchdowns in 2014. Wallace’s numbers with the Dolphins haven’t exactly been bad, but they’ve certainly been nowhere near numbers a guy making $12 million annually should be putting up.

Hence, Mike Wallace is a disappointment, which means he’ll fit in perfectly with the Minnesota Vikings.

They have a spectacular collection of underachieving wide receivers now!

In addition to Wallace, there’s former Packer Greg Jennings. Amazingly, Jennings isn’t quite as good when he doesn’t have Brett Favre or Aaron Rodgers throwing him the ball. He hasn’t surpassed 900 yards in either season in Minnesota.

Then there’s third-year man Cordarrelle Patterson. If you play fantasy football, you surely remember how Patterson was supposed to emerge as a legit No. 1 in 2013. Instead, he turned in a pathetic 33 receptions for 384 yards.

You would think one of these clowns has to go.

Our money is on Patterson, who was supposedly already being shopped. In addition to being awful, he’s the same kind of receiver Wallace is — a deep threat.

That being said, Patterson has only been in the league two seasons and isn’t expensive. Jennings, on the other hand, is. He carries a $9 million annual salary, which is pretty high for a guy obviously in decline.

Either way, we once again thank the gods that we are not invested in the pathetic mess that is the Minnesota Vikings.