Get Your Greg Jennings Jersey Out of the Closet 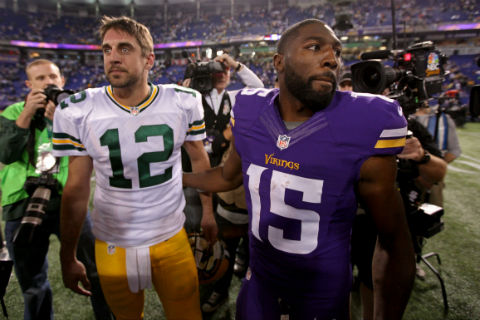 It was just announced that former Packer wideout, Greg Jennings, was released by the Minnesota Vikings. The move was hardly a shock as the Vikings’ recent acquisition of another big money receiver – Mike Wallace – made Jennings expendable and his cap number even more onerous.

Just two years ago Jennings left the winning ways of Green Bay and the statistical cash cow of Aaron Rodgers to seek greater appreciation and money across the River. As it turns out, Greg got neither.

His original deal of $45 million for five years actually ended up netting Jennings $18 million for two seasons of play, in which he averaged 64 catches, 775 yards and 5 TDs a season. Those wouldn’t be bad numbers for a #2 receiver; unfortunately for the Vikings, Jennings was making #1 receiver money.

The Vikings have claimed they offered a restructure to Jennings but could not reach agreement. Considering the trade for Wallace and offensive coordinator Norv Turner’s recent statement at the NFL combine that Charles Johnson was the Vikings’ best receiver, it is likely that Jennings didn’t see much of a role for himself in the new Viking offense under Teddy Bridgewater.

Probably the only surprising fact in this is that the Vikings were willing to swallow $6 million in dead money against their cap. They can mitigate the damage by pointing out that removing the $11 million cap hit that Jennings was going to account for means they saved $5 million to the cap in the process, but that is kind of like calling the US budget deficit falling to $500 billion “reducing our debt.”

Remember how receivers like Jennings were going to make Christian Steele an elite quarterback, even a better one, even a somewhat mediocre one? Wrong.

The only question that remains now is where Jennings is going to land. With Darrell Revis and many more following the new trend of players returning to teams they once played for, Green Bay will be an immediate suggested destination for Jennings. The Packers have plenty of money, still being a good $22 million under the cap, and we know Jennings knows the offense. Also, another thing Jennings has going for him is his versatility. Much like his mentor, Donald Driver, Jennings can play the slot. In fact, at this point in his career, he is probably no longer a starting wideout.

However, as much as I would like to see Jennings in Green Bay again, the Packers’ greater commitment to their running game has meant fewer four receiver sets, and I expect them to draft another tight end before signing another receiver. Also, Ted Thompson just drafted Jeff Janis and Jared Abbrederis last season. That probably means there is simply no room on the roster for another receiver.

Other suggested landing spots are, of course, a new deal with the Vikings, and then most of the other usual suspects- ie. Miami and Oakland. The New England Patriots have also been known to like veteran free agent receivers that they can get for cheap, though the performance of Brandon LaFell last season probably nixes that.

At this point, Greg can only hope to recoup all the money he left on the table by not accepting a smaller role and paycheck in Green Bay.