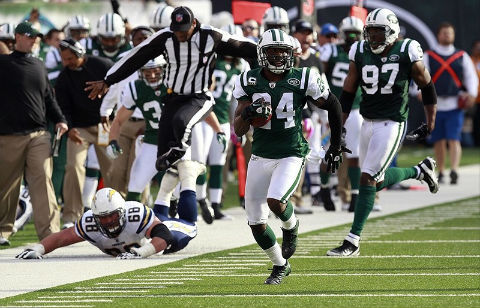 We heard a rumor here and a whisper there that the Green Bay Packers were interested in cornerback Darrelle Revis when he was a free agent.

Revis, who became a free agent after New England declined to pick up a $20 million option for 2015, is one of the top corners in the game and would have made a hell of a replacement for Tramon Williams.

Of course, that became a moot point when the New York Jets offered up an asinine five-year, $70 million deal.

The Packers, or any team in their right mind, weren’t going to compete with that.

To put this in perspective, the Jets agreed to pay a cornerback an average of $14 million a year from the time he’s 30 until the time he’s 35. The Jets are obviously run by a bunch of assholes.

Maybe that contract makes sense if the guy is the second coming of Darrell Green, but we doubt Darrelle Revis is that.

At any rate, this is not about the idiots who run the Jets.

It’s about the fact that the Packers actually appear to have made a legitimate attempt to sign a big-time outside free agent. Or at least they put their name in the conversation.

I mean, that’s unheard of, but Revis said it happened.

“(It) was the Packers, Steelers, Baltimore as well as Cleveland, the Chiefs, the Jets and also the Pats, so there was a number of teams there,” he said. “I sat down and had conversations with (them) to see if we could work something out.”

In the end, the Packers ended up signing absolutely no one but their own guys, as usual.

And Revis took the money.

But hey, maybe Casey Hayward is just as good and he just needs a chance to show it.