Charles Woodson Had That Idea Years Ago 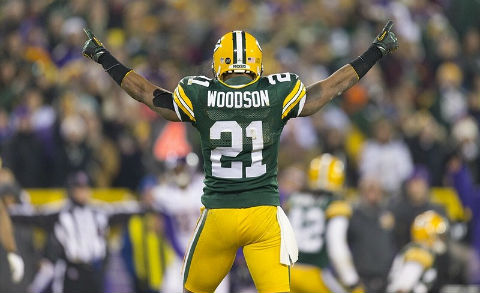 Our main man Charles Woodson was back in Green Bay Wednesday night to promote TwentyFour Wines, so naturally the local hack reporters were all over him, asking him all kinds of stupid questions.

Frankly, the only thing we found interesting from this peppering was when Woodson discussed Clay Matthews, who is so not our main man it isn’t funny.

Charles talked about Matthews’ move to inside linebacker last season. It was a move that not only improved the defense by shoring up the worst position on the team, but also saved Matthews’ season, which was shaping up to be the worst of his career.

Charles made that very suggestion years ago.

“What’s crazy is when I was here, I used to try to urge (defensive coordinator) Dom (Capers) to use Clay a little bit more in other areas of the field,” Woodson said. “Let him be the guy that people have to worry about where he’s going to be at rather than just being on one side. I could play the nickel or just a corner or whatever, but let that guy move around because he’s a beast, man.

“I think they saw it this year moving him inside and just allowing him to have really free rein over the field, and he was all over the place. It was awesome to watch him play football this year.”

Ahhhhh, but why would Dom Capers listen to anything anyone else had to say?

We’ve been running this damn 3-4 the same way since the 1970s! I’ll be damned if I change anything now!

Foresight and wisdom, thy name is Capers.