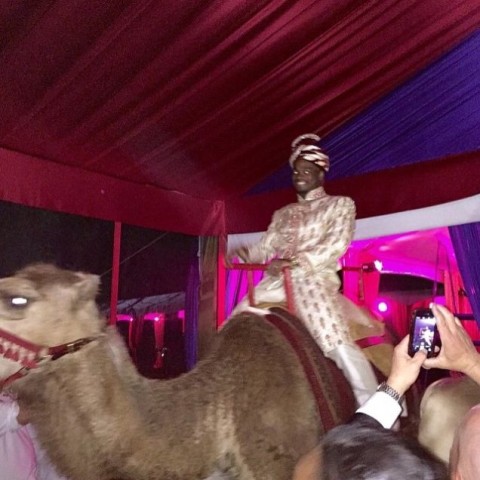 That’s Adrian Peterson right there. Riding a camel. Dressed up like an Arabian prince.

Why is that Adrian Peterson riding a camel, dressed up like an Arabian prince, you ask? Because it was his birthday.

Yes, Peterson threw a 30th birthday party for himself with an Arabic theme. He entered his party riding that camel.

Don’t ask why the party needed to have an Arabic theme. We cannot explain that. Nor do we care to.

But let’s think about this for a moment.

You’re a noted child abuser who has been suspended from his job for nearly a year. You’ve just gotten the go ahead to resume doing your job, but there’s all kinds of uncertainty about your future. That uncertainty revolves around where you’re going to do your job and how much you’re going to get paid to do it.

Because you’re a fucking child abuser.

Two choices for your 30th birthday.

1. Play it low key. Have a nice meal with your lady and maybe one or two of your many illegitimate children.

Yeah, option two was totally the way to go there.