This Should Take Care of Adrian Peterson and the Vikings 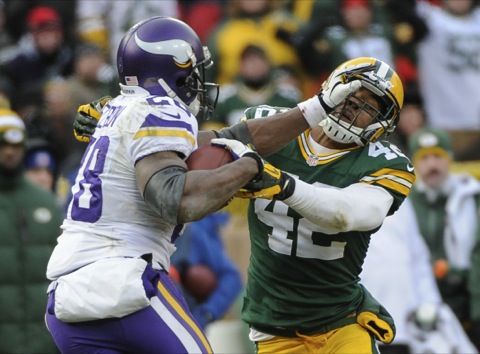 Maybe we won’t be seeing much of Adrian Peterson anymore, after all.

A week after the Minnesota Vikings insisted they wanted their superstar child abuser back, it suddenly doesn’t look like that’s going to be in the cards. This, thanks to an altercation between Peterson’s agent and Vikings management at the combine.

Peterson’s agent, Ben Dogra, had to be separated from a member of Minnesota’s front office during a heated verbal altercation about the former Pro Bowler, according to numerous sources with knowledge of the situation.

According to the sources, Dogra engaged in a heated exchange with Vikings vice president of football operations Rob Brzezinski during which the agent made it clear that Peterson would never play there again. The incident took place during a time when outside parties were in the vicinity. Finally, former Tampa Bay general manager Mark Dominik intervened, separating the men and diffusing the escalating tension, sources said.

Can you see Big Ted getting into it with an agent at the combine (or anywhere for that matter)?

Peterson has voiced displeasure about the reaction he got from people in Minnesota when it was revealed that he beat one of his many illegitimate kids. I guess if anyone is going to accept a child abuser, it’s people in Minnesota, right?

But no, not even those dopes were down with what Peterson did and that hurt Purple Jesus’ feelings, so now he doesn’t know if he can play for the perennial Super Bowl contender Vikings.

This incident pretty much makes that definitive.

In addition to what Dogra said, La Canfora gives us this.

“He will never play another game for the Vikings,” said one person close to the player. “It’s over.”

It’s widely believed that Peterson wants to play for the Cowboys because he’s from Texas. Dallas has a question mark at running back because DeMarco Murray is a free agent.

Personally, I’m not sure why you’d get rid of a 27-year-old Murray, who just led the NFL in rushing, for a guy who will turn 30 next month and is set to make $13 million this season. If the Cowboys did go that direction, they’d probably have to wait for Peterson to get cut and then sign him to a cap-friendly deal, considering they’ll be paying Dez Bryant huge money this offseason.

What we are interested in, is how Peterson’s departure from Minnesota affects the Vikings.

If the Vikings don’t handle this quickly, it has the potential to turn into a circus akin to Brett Favre’s departure from Green Bay, which clearly affected the team. The Packers won six games that year.