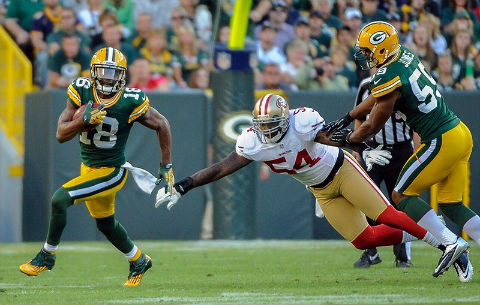 Randall Cobb has seen the report and he doesn’t think much of it.

Earlier this week, there was a report that the Green Bay Packers have turned their focus away from re-signing receiver Randall Cobb. The theory was, his price has gotten or is getting out of hand, so the Packers had refocused their efforts on tackle Bryan Bulaga.

Cobb took some time discount that rumor on Thursday.

Rule #1: Don't believe everything you hear in the media.

That’s the thing with this time of year.

Everyone has an agenda, so it’s hard to cut through all the bullshit and know what to believe.

The same thing happened with cornerback Sam Shields last offseason. First the Packers wanted him back, then they were going to let him test the market, and then they ended up re-signing him on the even of free agency.

We wouldn’t doubt that someone from inside the organization floated the rumor that the Packers were willing to let Cobb walk because his price was out of hand. That’s an easy way of saying, “Hey, you go have a nice time down in Jacksonville winning two games a year for the rest of your career.”

Because that’s literally the only leverage the Packers have with Cobb, who’s both young and coming off a career season.

The Packers have plenty of salary cap space available and our guess is they’ll still get a deal with Cobb done.