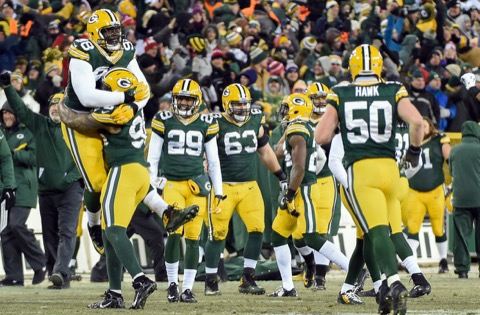 Free agent season is nearly upon us and the Green Bay Packers are in a pretty decent position financially. They have a projected $21 million in available cap space and that’s after factoring in their draft pool dollars.

Sportrac estimates the Packers available cap space to be precisely $21,064,792, which gives them the 13th-greatest amount of financial flexibility in the NFL.

That number could increase significantly if the Packers, as expected, release veteran linebackers A.J. Hawk and Brad Jones. In doing so, the Packers would gain more than $7 million in salary cap space, pushing their overall total of available dollars to more than $28 million.

Those moves would give the Packers the eighth-most cap space in the league. They would also be helpful if the Packers are going to re-sign receiver Randall Cobb at or near his $9 million per season asking price.

Now, before you get any delusions of grandeur and start thinking about the Packers signing someone else’s free agents, we’ll note that the Packers have 16 free agents of their own.

Will all of them be re-signed? No, nor should they be, but we anticipate a number of them will be.

Of the unrestricted free agents, we can really only see four guys whose salary cap numbers are going to increase substantially from what they were last season — Cobb, Bulaga, House and, possibly, Guion.

There’s a good chance House ends up playing elsewhere and Guion has some legal matters to clear up before he can even think about a new contract. The rest of that list gets a Packers-friendly deal to return if they’re asked to return at all.

So let’s say you’re the Packers general manager, you’ve got $28 million to play with and there’s your list of free agents. What do you do?