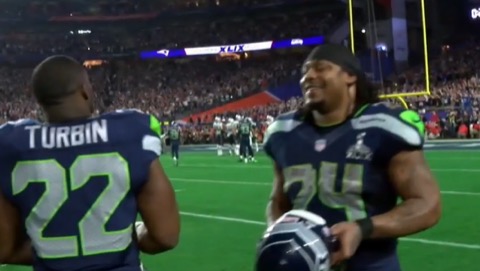 You know the pick I’m talking about. The one Badger great Russell Wilson fired to Malcolm Butler that for all intents and purposes ended the Super Bowl. This is supposedly Seahawks’ running back Marshawn Lynch’s reaction.

There’s not really much context there and why would a guy laugh at his own team’s demise?

Well, why does Marshawn Lynch do anything?

And this was his way of expressing his displeasure. Or more accurately, saying, “See what happens when you don’t give me the ball at the 1, you stupid pricks?”

And listen, I thought about this too. Surely this clip must have been taken from a different point in the game.

Go watch the NFL’s SoundFX video. Around the 5-minute mark, you’ll briefly see Lynch strolling off the field laughing (thanks to TBL for that).

I also found it interesting that if you watch that SoundFX video a little longer, you’ll hear Wilson begin to question the play call and then stop himself.

Oh well. The bad guys won, the worse guys lost and the good guys watched it at home on TV.