Letroy Guion Arrested, Is an Idiot 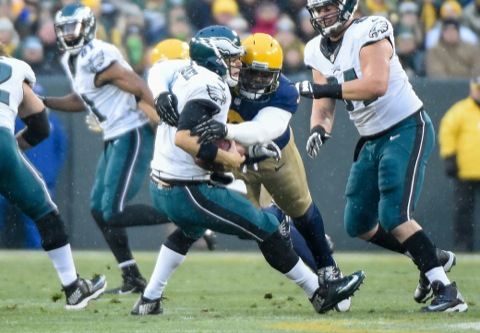 Guion was arrested Tuesday night in Starke, Florida and charged with felony possession of marijuana and a firearm.

And this is what happens when you sign guys who played for the Minnesota Vikings.

That being noted, we’re going to reserve judgment until more details are available. Frankly, we could give a shit about the weed. When are the police going to stop wasting taxpayer dollars by arresting people for weed?

What’s really concerning here is the felony charge. If Guion were caught with a couple joints, the charge would have been a misdemeanor. Pay a fine and go home. This is obviously something more than that.

Of course, the felony charge could just be related to the gun. At any rate, we’re speculating.

What isn’t open to speculation is that Guion is an idiot.

He played on a one-year deal in 2014 and had his best season as a pro, with 32 tackles and 3.5 sacks. The Packers were talking to him about a new deal during the season. Everything was set up for Guion to cash in.

Now, the best-case scenario for Guion is he somehow avoids a trial and speedily gets to resume his NFL career. Even then, he needs to find a team that’s willing to take him and sign a deal. He was going to get a decent long-term contract. Now, he’ll probably have to wait around for another one-year deal worth somewhere around the $1 million he made in 2014.

Is it possible that deal could be with the Packers?

Yes. They obviously value his contributions on the field and Guion wouldn’t be the first guy who got into trouble and then played for the Packers. They gave thrice-arrested defensive tackle Johnny Jolly another shot in 2013 and signed troubled Oregon tight end Colt Lyerla just last season.

So say it with me…