Here Are Some Goal-Line Stats to Ponder 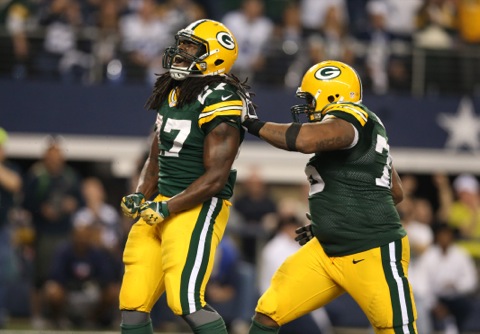 We hear everyone is pretty riled up that the Seattle Seahawks didn’t hand the ball to Marshawn Lynch and instead tried to throw a slant when they were on the Patriots’ 1 in the closing seconds of the Super Bowl.

You’ve probably heard this — that play failed. It was picked off by New England’s Malcolm Butler and good for everyone involved. Naturally, the second-guessers want to know, “WHY DIDN’T YOU RUN THE BALL!?!”

Well, we don’t care why Pete Carroll didn’t run the ball. We pretty much blasted Green Bay Packers coach Mike McCarthy for not running the ball in that same situation all year.

So, if this conversation were about McCarthy and the Packers, yes, we’d be incredulous. However, we give zero shits about the Seattle Seahawks, so we could care less if they ran or passed in that situation.

Anyway, we promised you stats and we’re going to give you stats.

That handsome devil Rob Demovsky dug up some stats that illustrate how the Packers operated when they were on the opponent’s 1-yard line this season. If you watched the Packers in 2014, the results won’t surprise you.

You can say what you will about that division of labor, but it really comes down to the next group of statistics — how successful they were. The answer is “not very” in either case.

The obvious breakdown is that if you let Aaron Rodgers throw from the 1, you’re successful 50 percent of the time. That’s not very good, especially considering Rodgers completed 65.6 percent of his passes overall. And with that, you could simply say Rodgers is subpar throwing at the goal line.

The run breakdown is a little more complex since more guys handled the ball. Overall, the Packers cashed in 45.5 percent of the time, which is even worse than when they were passing the ball.

Eddie Lacy carried the ball seven times in these situations and scored four touchdowns, which made him successful 57.1 percent of the time. John Kuhn carried it three times and scored zero. Rodgers took it once and scored once.

There’s one obvious answer here — stop handing the damn ball to Kuhn at the goal line.

Maybe give it to Rodgers every time? We wouldn’t recommend that either. Rodgers was successful in week 17 against the Lions, but if you’ve seen him attempt sneaks in the past, you know it’s not pretty. That is seriously one aspect of his game that is not anywhere near top-notch.

That leaves Lacy as the Packers’ best option, unless they start experimenting with different kinds of runners, like James Starks or DuJuan Harris. Harris’ diminutive (5-8), but stout frame and low center of gravity probably make him perfect for such opportunities. He’d have to work his way off the bench first though.

That bigger issue that this illustrates is the Packers need to dramatically improve their goal-to-go (and red zone) offense. That should be a priority for 2015.