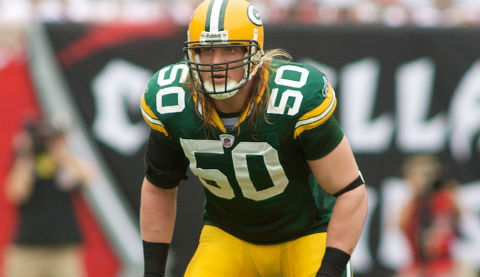 The other shoe has dropped.

The Green Bay Packers cut one regressing inside linebacker on Friday, when they released Brad Jones. They cut the second, nine-year veteran A.J. Hawk, on Wednesday.

I first have to say, I have literally been dreaming of this day for YEARS! While I have nothing against A.J. Hawk as a person, I have a filing cabinet full of shit that I have against him as a player. Hawk has never been anything more than just a guy. He never, ever lived up to being the fifth overall choice in the 2006 draft.

The fifth overall pick in any draft should be a playmaker. A.J. Hawk and playmaker antonyms.

About the best you could ever say about Hawk as a player is that he played hard and was a team guy.

Hawk could single-handedly be the reason NFL teams rarely pick inside linebackers in the first half of the first round.

And finally, to all of you out there seething as you read this because you want to tell me how great A.J. Hawk is, for one final time — FUCK YOU! A.J. Hawk never was and never will be great. He never lived up to his billing and now, finally, this goddam nightmare is over.

We all saw the writing on the wall this past season and that includes Hawk.

In 2014, Hawk’s play regressed from mediocre to unacceptable and his snaps were reduced dramatically. While Hawk still played a role in the little-used base defense down the stretch, he was essentially relegated to a backup role as Sam Barrington and Clay Matthews saw their roles increase inside.

During the season, in which Hawk had 89 tackles, he admitted he thought about it potentially being his last year with the Packers.

And of course, there was significant financial incentive for the Packers release Hawk as well. By cutting him, they gain $3.5 million in salary cap space.

The Packers nonetheless played coy with this move, which is exactly what we’d expect when it comes to a long-tenured veteran who has invested as much in the community as Hawk has.

In perhaps a last-ditch effort to avoid the inevitable, someone planted a story with Rob Demovsky last week about how Hawk played last season with an injured ankle. While we’re happy to commend Hawk for not being a vag like Clay Matthews, it was time for this day to come.

The Packers have finally realized what we’ve longed harped on — they need an upgrade at inside linebacker. It looks like this is the offseason they’re going to make that happen.

This is Davante Adams’ Dope Ride