That 12th Man Nonsense has a New Meaning

As you are probably vaguely aware, the Seattle Seahawks refer to their fans as the 12th Man. Of course, this is completely idiotic, but more on that in a moment.

There’s all kinds of 12th Man nonsense, like a flag that gets raised before every Seattle home game, all kinds of Seahawks gear with a 12 on it, and, well, that’s about all I can think of because this is all completely inconsequential to me.

Here’s a brief history lesson, which also illustrates why I have zero respect for Seattle’s 12th Man BS.

The 12th Man didn’t even originate with the Seahawks. It was born in College Station, Texas, home of the Texas A&M Aggies, where the football team started the 12th Man tradition in 1922. The phrase has long been trademarked, which resulted in A&M suing the Seahawks for using the 12th Man mark back in 2006.

They settled, but now the Seahawks have to license the use of the 12th Man from Texas A&M.

Yes, you read that correctly. The Seattle Seahawks license the name they call their fans from a school in the Big 12. They are just that unoriginal. It’s as if something like this happened one day in the Seahawks front office…

“Alright guys. Our football team sucks. We have no history or tradition of our own. Our fans are a bunch of face painters with no identity. Our mascot sucks. We desperately need something for these people to latch onto, to make them feel as if they are real football fans and our organization is important. What do you got?”

So there you go. The Seattle Seahawks 12th Man is born.

Unfortunately for those clowns, the 12th Man can have another meaning entirely after Super Bowl 49. All you have to do is throw a dash in there in between the 1 and 2 and you now have the Seattle Seahawks Super Bowl record. 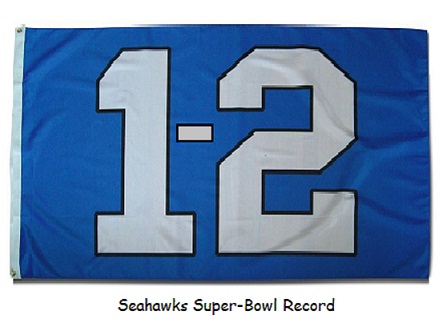 Thanks to Christopher for sending this in.

Clay Matthews Expects to Play Inside

Clay Matthews Expects to Play Inside