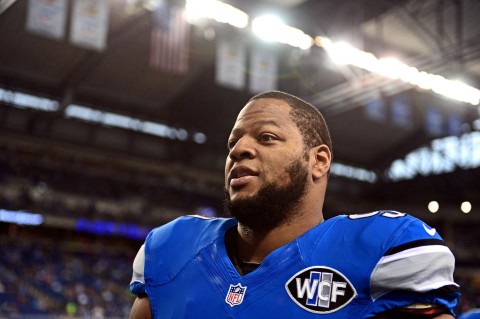 Green Bay Packers guard T.J. Lang was doing some radio program in Michigan on Friday and he had a few interesting things to say about Detroit Lions defensive tackle Ndamukong Suh.

You’ll remember that pile of crap as the guy who purposely stepped on Aaron Rodgers‘ injured leg in week 17, said he didn’t do it on purpose, got suspended for a game and then ended up playing in that game because the league office is ruled by hypocrisy.

Lang says Suh also tried to start a fight during the contest, after trying to injure Rodgers.

“A couple plays later, we got into it a little bit. … He was challenging me to a fight. It was all part of, just the frustration, I think. I’m not going to say that I shut him down the whole game because we were double-teaming him 90 percent of the time. We’d be idiotic not to do that, the type of player that he is. I think he was just frustrated that we were beating them, that we were kind of getting after them a little bit. We ran the ball better than anybody had done the whole season against them. So I think just a combination of things. He just kind of snapped and started saying some things that we can’t say on air.”

Lang contrasted that by saying Suh was the exact opposite when the teams first met in week 3 of the 2014 season. That he was actually complimenting people and helping guys off the ground.

But of course, when you’re a total piece of shit, you can only disguise that for so long.

Eventually, you explode like a shitty oil well. A shit well.