On to the Seattle Seahawks

by Monty McMahon
in Uncategorized
37 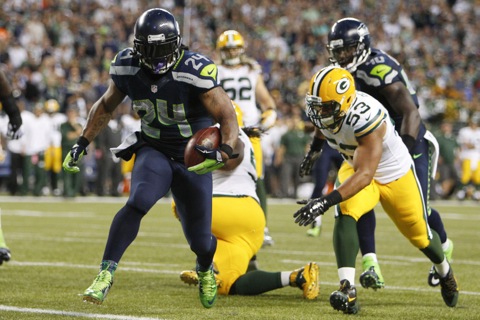 The Green Bay Packers will get a rematch with the Seattle Seahawks in the NFC Championship game, this weekend.

It’s not an exciting rematch like a rematch of the NFC Championship game itself would be. Rather, it’s a rematch of two teams who met in the kickoff game way back in week 1. In that game, the Seahawks completely throttled the Packers by a score of 36-16.

That game wasn’t so much about anything the Seahawks did offensively, although Marshawn Lynch did run for 110 yards and two touchdowns on 20 carries — part of a 207-yard overall rushing effort by Seattle. Special thanks to the Keystone Cops, also known as the Packers defense, which seemingly missed more tackles than they made.

More so, the game was about what the Packers couldn’t do offensively. Or, what the Seahawks did to the Packers defensively, if you prefer.

The Green Bay offensive juggernaut hadn’t earned that title in week 1, when pretty much no one on that unit played well. Aaron Rodgers threw for only 189 yards, one touchdown and one INT. He couldn’t hit the big play outside and refused to take anything short or over the middle. In fact, Rodgers seemed afraid to look at any receiver other than Jordy Nelson, who he targeted 14 times in his 33 attempts. Meanwhile, the Packers netted just 80 yards on the ground. Eddie Lacy looked far too tentative and finished with 37 yards on 12 carries.

A lot for the Packers and not much for Seattle.

It should be noted that the Seahawks led the NFL in rushing offense.

The Packers, meanwhile, went from inept offensively to the No. 6 overall offense in the NFL and the No. 1 scoring offense. Their defense also improved that tackling problem dramatically, largely by vanquishing Brad Jones from the starting lineup, replacing A.J. Hawk with Sam Barrington and waiting for Letroy Guion to regain his form.

Let’s be honest though, the Packers defense isn’t a top tier unit. They are, however, a hell of a lot better than the version that played Seattle in week 1.

Nonetheless, the Packers opened the week as seven-point underdogs. And rightfully so.

Of the Seahawks’ four losses this season, only one came at home. And guess who beat them…

The Cowboys outgained Seattle 401 yards to 206 in that game. They ran the ball well and stopped the run, which are tenets of winning playoff football. In the game, DeMarco Murray had 115 yards on a whopping 28 carries, while Lynch had just 61 on 10. That was part of a weak 80-yard overall rushing effort by Seattle.

Basically, the Cowboys decided to pound the ball with Murray and then pound it some more. In the end, they had a time of possession edge greater than 15 minutes. Seattle had the ball for about a quarter and a half and Dallas held it for the rest of the game.

So there’s your formula to win in Seattle, which the Packers will surely pay no attention to.

It’s not as if Seattle doesn’t have chinks in their armor, though. They also lost to San Diego, Kansas City and St. Louis this season. Only the Chargers were a playoff team and they beat the Seahawks on the strength of Phyllis Rivers’ arm.

Although they would tell you differently, this Seahawks defense is not impenetrable.

The Carolina Panthers, who are greatly inferior to the Packers, had a shot of making a game out of their divisional match-up with the Seahawks last week. If it weren’t for two boneheaded picks thrown by Cam Newton and a really atrocious pass defense, they would have been right there.

And that pretty much spells it out in our minds.

If the Packers don’t turn the football over or give up big plays, they have a shot.