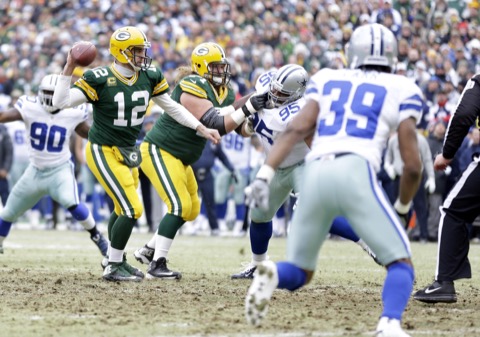 Here’s something stupid to kick off your day. The Seattle Seahawks, a team where intelligence is a distant second to athletic ability, are not buying Green Bay Packers quarterback Aaron Rodgers’ calf injury.

Apparently, he’s just hobbling around out there for show.

“I’m not buying into this leg issue,” Seahawks safety Earl Thomas said. “I saw him scramble close to the goal line on the Cowboys, so he’s not fooling me with that. I’m not falling into that.”

You mean that time that he took a couple steps forward in the pocket and then threw an awkward touchdown pass to Andrew Quarless?

“That’s the mentality you’ve got to have,” Chancellor said. “I’m not really concerned with his hobbly or wobbly calf, whatever. I’m concerned about Aaron Rodgers. If he’s in that game, no matter how he’s feeling, he’s still Aaron Rodgers. He’s capable of making plays, capable of getting the ball downfield, getting it to his receivers and just running their offense.

“So you’ve got to respect a guy like that. No matter what’s wrong with him, you can’t doubt him or say that it’s going to be a little different because he’s hobbly and wobbly. You don’t want any surprises, so just go in with that mentality and you won’t be surprised.”

Good for you. Well done on forming a rational and independent thought.

Then here’s linebacker K.J. Wright, who is fully able to express what we’re really talking about here — that Seattle isn’t going to play Rodgers any differently than if he were 100 percent healthy.

“We’re going to treat him like he’s healthy and 100 percent,” Wright said. “I expect them to run the similar plays that they have in the past.

“We know he’s a little banged up, but he looked just fine to me in that last game. He was making most of his throws. He didn’t scramble as much and get out of the pocket as he’s done in the past, but for the most part, he’s making all of his throws and he looks just fine.”

Obviously, Seahawks coach Pete Carroll has been drilling in the idea that his team shouldn’t take Rodgers lightly, even though he’s injured.

That’s probably a sound idea, considering an injured Rodgers has thrown for more than 300 yards in his last two games.

John Fox Now Gets to Lose to Packers Twice a Year

John Fox Now Gets to Lose to Packers Twice a Year