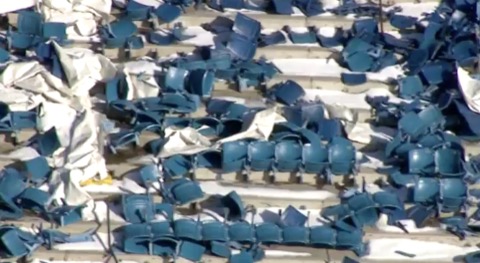 There was a time when the Detroit Lions weren’t the NFL laughingstock that they are today. That time was the 1990s and that team played in a magical place called the Pontiac Silverdome.

Alright, maybe it wasn’t exactly a magical place, but the Lions — behind Barry Sanders and a pretty solid defense — won some games there. Also, and more importantly, the Pontiac Silverdome was home to Wrestlemania III.

It’s where the Hulkster came back from near death, thanks to the adrenaline supplied by thousands of a Hulkamaniacs, to defeat the unbeatable and suddenly angry Andre the Giant.

That may sound pricy, but the Silverdome cost $55 million to build and that’s in 1975 dollars. So it was a pretty good deal for a football stadium.

Last year, the roof was destroyed by weather and was removed. The owner also auctioned off the contents of this former shrine of sport in 2014.

Like much of the rest of Detroit, a once-great structure is now a dilapidated eyesore.

There’s probably a metaphor for the Detroit Lions in here waiting to be tossed about, but I’ll leave that to you.

Previous Article
Brett Favre: No Hard Feelings for Rodgers
Next Article
Davon House Sounds Like He’ll Give Packers a Discount