That Lucky Beard Guy Now has a Bobblehead

Because OF COURSE HE DOES! While everyone else was shitting their pants about Jeremy Wilcox, the guy whose beard Green Bay Packers quarterback Aaron Rodgers tugged on prior to returning to light up the Detroit Lions in week 17, we have been doing this one.

Because really, who cares?

Well, a lot of people think this is a HUGE deal. Why?

I cannot fathom the answer.

Nothing against Wilcox. I saw an interview with him when I was back in those locales and he seems like a pretty swell guy. Also like a guy who doesn’t give a shit about all the attention he’s getting, but he’s getting it anyway.

So naturally, all roads have led to this inevitable intersection. The one where Jeremy Wilcox gets his own bobblehead, some jackass charges $15 for it and you buy one.

You can place that right up next to your Aaron Rodgers bobblehead and then one day when your son asks you why you have a bobblehead of a construction worker you can explain to him the magical story of Jeremy Wilcox, lucky beard guy.

A tale to regale the whole family with for years to come! 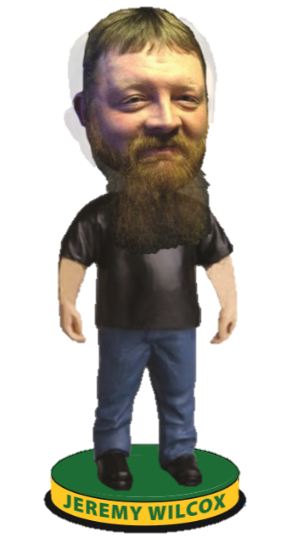 Now, these are limited edition, so you better hurry!