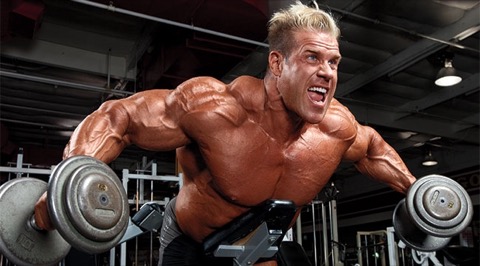 Surely, you were wondering what sort of hijinks our main man Cutty! is up to now that he doesn’t have any football to play for a while. Well, we’re not really sure, but we did find out that Cutty! made life miserable for the other Jay Cutler this past season.

Yes, in case you’re unaware, there’s another Jay Cutler. He is decidedly non-Cutty! While Cutty! is out there flinging picks, smoking cigs and not caring, Jay Cutler is pumping iron, being healthy and caring way too much.

He’s a bodybuilder. A four-time Mr. Olympia, in fact. And that’s four more titles than Cutty! will ever win.

“It’s been a little tough for me sometimes on Twitter, especially on Mondays,” said Cutler. “There’s … animosity.”

Partly because he doesn’t want to get crapped on by Bears fans, but mostly because…

So, Cutler must hate Cutty!, right? Somehow, he does not.

“I think Cutler’s a great quarterback; he just didn’t have the best year over there,” said Cutler.

“This guy has a great contract, and he’s still there. He was still trying to carry that team, and I have to respect that. I’ve won and lost, and it’s easy for people to say he’s finished, and then you perform again, and they’re back on the bandwagon. I respect the guy.”

I would have changed my name if I were cursed with the moniker Jay Cutler. But then, he probably feels similar to Michael Bolton.

“Why should I change? He’s the one who sucks.”