Dez Bryant Let the Dallas Cowboys Down, Should Be Ashamed 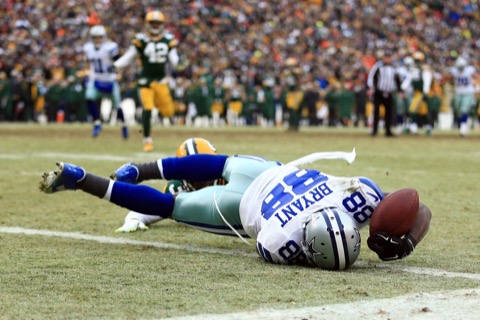 The focus of this conversation has been all wrong since Dez Bryant willingly put the football on the frozen tundra of Lambeau Field. Instead of chastising the player for not knowing the rules of the game or being acutely aware how crucial the situation was for his team, the resounding discussion has wrongfully been about the rules of the game being faulty.

What should be a discussion about the gritty Green Bay Packers and a dominant second half performance out of the league MVP, instead has been relegated to a circus sideshow with many people crying foul, blasting the NFL rules and supporting Dez Bryant and the Dallas Cowboys as having been “screwed.”

Let me clue you in on something Cowboys fans. The refs didn’t screw Dez Bryant or the Dallas Cowboys.

Dez Bryant screwed the Dallas Cowboys, their fans, his teammates, and himself by not knowing and understanding the rules of a game that he is paid entirely too much money to play.

The biggest problem with this whole discussion is that most people are acting like this specific rule is there for one scenario, when in fact this Dez-situation (almost unfortunately) is included under part of a general rule designed to make it more all-encompassing and thus easier for officials to rule on. Based on the letter of the law, the rule was correctly enforced.

It’s not to say that the rule is perfect, but the NFL had to draw a line somewhere to prevent an already phonebook-thick rules manual from getting a few centimeters fatter by creating exceptions to the “process of the catch” rules. All that would do is further complicate the game to everyone watching, playing or coaching the game. In their decision to go that all-encompassing route over five years ago, the powers that be changed things for the people catching the ball.

Let me repeat that. THIS RULE HAS BEEN IN PLACE FOR MORE THAN FIVE YEARS.

Some people got the memo early and learned to adapt. Others like Calvin Johnson didn’t, whined a tune in 2010 that is all too familiar to us in the last 24 hours, and has since learned to adapt. People complained about it then and they complain about it now, but how much complaining has been done between 2010 and 2015? In my opinion, not enough to change the rules of the game. The players must adapt to the rules, not vice versa.

It is on the players and the coaches to make sure the rules are clearly understood and there was an obvious failure for both the Dallas Cowboys’ coaching staff, and a first-team All-Pro wide receiver who clearly didn’t know the rule, and then blamed the rule for his own ignorance. If you want a definition of the term zero accountability, I present to you one Dez Bryant.

Not only did Dez Bryant disgrace his teammates and screw over the Dallas fans, he was even too clueless about the rules to realize in his postgame comments that he was providing enough rope to hang himself publicly.

TRANSLATION: I don’t know the rules of the game.

TRANSLATION: I don’t know the rules of the game and don’t feel like I should have to. They were wrong. I was screwed.

DEZ: “I was reaching for the end zone. What was I supposed to do?”

ANSWER: Knowing it was 4th down and 2 and a do or die situation, you should have wrapped up that ball so freaking tight on the way down that your only fear would be that it might burst from the pressure. That’s what you should have been thinking. But you weren’t thinking about anything. And that’s on you.

It comes back to a term that is near and dear to my heart: situational football. A player must know what to do in crucial situations in a game to achieve a goal.

What was Dez Bryant’s goal on the crucial 4th and 2? Answer: Make the catch, secure the ball and get the first down.

What did Dez Bryant act like the goal was? Answer: Catch the ball and score a touchdown.

In that time, as I awaited the decision from the replay booth, I couldn’t help but hear the voice of my former high school hockey coach Paul Butkovich in my head, who when warning us about the referees would always say, “Don’t give them a reason!”

And the message was clear. Officiating can go either way and is largely a judgement call of an individual not playing in the game. The less of a reason you give the officials to make a call, the less likely you’ll have a call go against you.

Simply put, Dez Bryant gave the referees a reason, when all he had to do was wrap up what would have been an amazing and athletic catch over perfect coverage.

The reason that happened is because Dez Bryant didn’t know the rules of the game and he was not situationally aware. And that was, is, and always will be on him.

P.S. — The Packers would have won anyway.