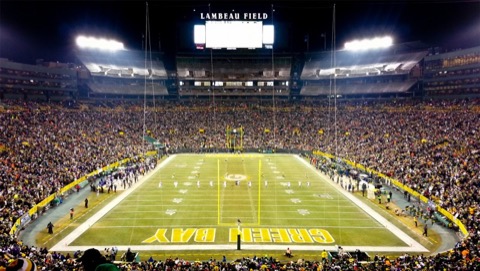 I remember the days when Lambeau Field didn’t look much different than that decrepit piece of crap about 120 miles south known as County Stadium. Except it was green. Today, it’s something else entirely. Something that says big commerce. And also history.

Mostly big commerce though, but whatever.

Anyway, the Dallas Cowboys are rolling into town and head coach Jason Garrett sounds like he’s worried about the latter. The Green Bay Packers history and mystique that is on display at Lambeau Field once you cut past all the bullshit.

Garrett has decided the Cowboys are going to stop at Lambeau on Saturday just to suck it all in. That way they won’t be trying to suck on Sunday.

“We just wanted to do it for whatever the reason,” Garrett said. “A lot of guys haven’t been to Lambeau, we’re driving right past the stadium … get out, move around. It’s an early game on Sunday so the idea that guys haven’t been to this place before, you’re getting there early, we don’t want to spend any time looking at the place. ‘We did that yesterday, guys. Let’s get up, put our cleats on and let’s go play football.’

“So that’s probably it more than anything else. If it was a late game Sunday and you had a little more time, maybe you don’t do this but we just felt it made sense and logistically it was easy to do.”

Maybe the Cowboys do it differently than other visiting teams, but the Packers’ opponents typically stay in Appleton, which is south of Green Bay. Green Bay’s airport is also on the south side of town, so logistically, it would sure seem like the Cowboys are going out of their way to visit Lambeau Field on Saturday.

Not that we give a crap one way or the other.

We just find it interesting that Garrett seems so concerned about this.

Hey, maybe you could take another detour and roll down to Burlington and see where Tony Romo finger banged Mary Jane Rottencrotch whilst wearing a slightly stained backwards ball cap all those years ago.

Previous Article
How Miffed Are Detroit Lions Fans?
Next Article
This is Eddie Lacy’s Time