Clay Matthews Quit on the Packers 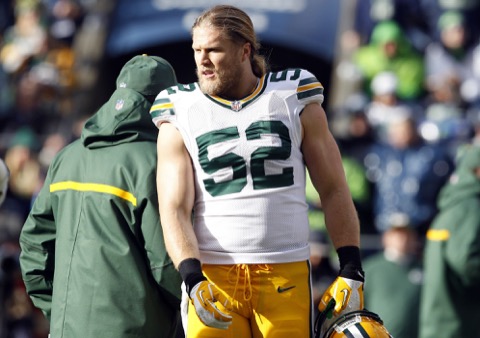 There was no direct answer as to why Clay Matthews wasn’t on the field as the Green Bay Packers futilely tried to stop the Seattle Seahawks near the end of regulation in the NFC Championship game. However, it’s clear that it was Clay’s decision not to be out there.

Matthews was absent on the Seahawks’ final two drives in the fourth quarter, both of which they scored touchdowns on. He would return for overtime, so obviously he wasn’t injured. That means the only conclusions that could be drawn are that he was benched or he quit.

“I talked to Clay. He said he needed a minute. Looking him in the eye, I didn’t see any reason for his concern. Unless it impacts a game, I’m not going to be notified,” McCarthy said.

While that may not make a lot of sense, the question was posed as one about whether Matthews had suffered a concussion. Because, for some reason, all the bozos who cover the Packers are unable to state the obvious question in a straight-forward manner.

Why wasn’t Clay Matthews on the field?

So McCarthy said Matthews didn’t have a concussion and then tried to cover for him a little bit by saying the training staff was looking at his knee. He also mentioned that Jordy Nelson waved him over, presumably to take a look at Matthews and see if he was injured.

But the statement is definitive. There is no evidence that Matthews was injured. Nor was there mention that someone decided to take Matthews out of the game.

“He said he needed a minute.”

Matthews took himself out. As Shawn outlined earlier this week, Matthews was out for much longer than a minute. He was out at least 20 minutes in real time and then went back in for overtime. He also played in the Pro Bowl on Sunday.

Meanwhile, Seattle corner Richard Sherman finished the NFC Championship game with a sprained elbow and safety Earl Thomas finished it with a dislocated shoulder. Neither of those guys needed a minute, much less 20.

The Packers needed their best defensive player on the field down the stretch of that game.

He was too soft to come through.

At least now we know this. Don’t be surprised when Clay Matthews pulls himself in crunch time of a big game because his vagina hurts.