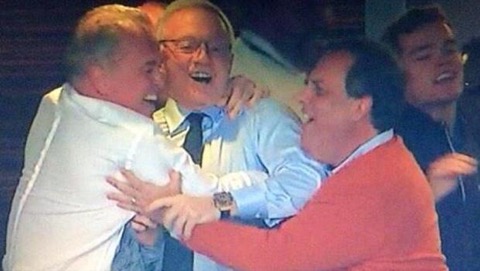 The Dallas Cowboys will be bringing their mascot — a fat, middle-aged politician named Chris Christie — to town when they face the Green Bay Packers on Sunday.

Scratch that. The mascot will be paying his own way, so as not to raise any ethical questions.

That’s right. Cowboys owner Jerry Jones flew Christie, the governor of New Jersey, to Dallas last weekend for the game and then let the fat man sit in his private suite. And people started wondering, is this ethical? That’s a good question, considering an agency Christie oversees — specifically, the port authority — does business with one of Jones’ companies.

Well, there will be no such questions this week and let’s just forget who paid for what last week, okay?

“Not wanting to risk breaking the team’s 5-0 streak by messing with karma, Governor Christie, his orange sweater and his son Andrew will all travel to Lambeau Field this weekend to attend the game against the Green Bay Packers,” spokesman Michael Drewniak said in a statement.

“The Governor will be paying for travel and tickets for himself, his sweater and his son to make sure we keep silliness out of the football season,” he said.

I don’t really know what that talk about the streak is and I don’t really care. Let’s assume Christie was at five Dallas wins this season.

The important thing here is obviously the sweater. Otherwise why would you specifically mention an orange sweater twice?

If you watched the game last week, you saw this fat bastard in his orange sweater. He was awkwardly trying to wrap it around Jones when the Cowboys took the lead. And hey, good news, everybody!

Chris Christie is wearing his orange sweater again on Sunday!

Who wants to bet it has sauerkraut and ketchup stains on it by kickoff?

In all seriousness, Jones has credited Christie and his sweater as some sort of good luck charm. Obviously, WE need a good charm too.

I say we go find some random person who’s only been at Packers wins this season and who’s worn the same thing to every game. In fact, go ahead and submit your applications below. I’m sure it won’t be hard to find a good luck charm better than Chris Christie.

Of Course Tom Wrigglesworth has a State Farm Commercial