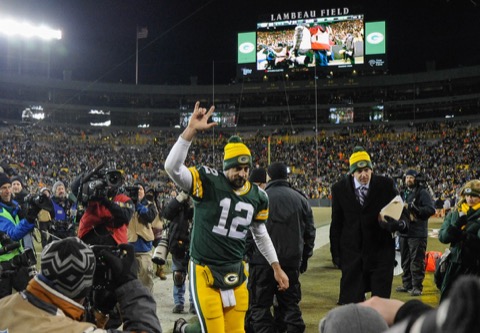 We know some of you are perfectly content with the Green Bay Packers getting into the playoffs, maybe winning a game and then moving on to next season.

We are not. We expect dominance, championships and, more often than not, the type of play and results that allow us to look down on the rest of the NFL, which is, in fact, greatly inferior.

I’ll tell you who gets excited about a playoff appearance.

He knows that since the 2010 season ended, the Green Bay Packers haven’t been good enough in the playoffs. He uttered those very words when asked about the team’s playoff performance in reason seasons: “Not good enough.”

The first and last of those losses were at Lambeau Field.

Certainly, the Packers craptacular defenses of year’s past will take plenty of blame for those losses and deservedly so. However, Rodgers hasn’t played as well as he did during the 2010 run either and he knows it.

“I go into the game expecting to play and excited about the opportunity to be a guy that my teammates can count on.”

I think it’s safe to say the Packers need more from Rodgers than just good performances in the playoffs. They, at times, need him to carry them because, let’s face it. As long as Mike McCarthy is around, the Packers are never going to be able to or be built to win with great defense.

This year, the Packers defense appears to be good enough. Not great or dominant by any stretch, but certainly good enough to get them where they want to go. So long as Rodgers is playing like the best quarterback in football…

Rodgers hasn’t played particularly poorly in the playoffs since 2010, he just hasn’t been spectacular like he was during that run.

Here are the numbers.

Both stat lines are over four games.

These Packers, simply, will go as far as Rodgers can carry them. Hopefully, he’s up to the task.