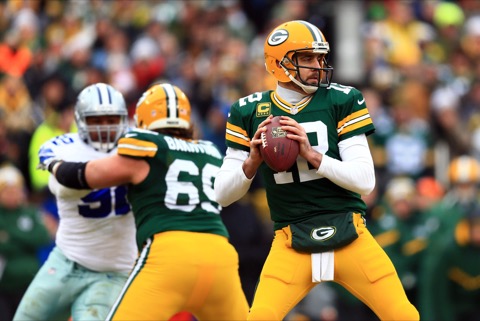 That’s nothing but good news, considering Rodgers had done nothing but get treatment the seven days prior to last Monday. This Monday, he’s coming off a game where he took his share of hits and it sounds as if he’s no worse for wear.

“He made it through the game very well,” McCarthy said. “I think he feels better this week than he does at this time last week.”

After the game, Rodgers was less than concerned about the injury. He had this to say, which Jason Wilde is currently screen printing onto a t-shirt.

“I think I’ve got 120 minutes left in me,” Rodgers said. “So I’m going to do everything I can to make sure I can play all those minutes.”

If you’re a little dimwitted, 120 minutes is the length of two full football games, i.e. the NFC Championship and Super Bowl.

So stick that in your pipe and smoke it!

Now, on another note, Rodgers whipped out the belt on Sunday, which I totally missed. He did it after throwing that bullet to DickRodge for what proved to be the winning score. Here it is in wonderful, spectacular .gif form. Rodgers looks pretty okay right there too, doesn’t he?