Stream of Consciousness: Taking Down the Patriots Edition 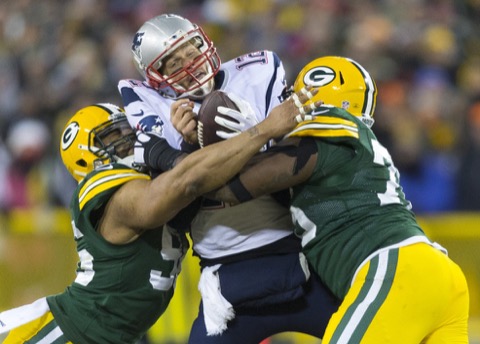 Sometimes the big games live up to the hype. In what was the most highly-anticipated game of the NFL season and a very possible Super Bowl match-up, the Green Bay Packers went wire to wire and hung on in the end, defeating the New England Patriots 26-21.

Here are the 10 things that stood out to me in this epic Packers’ win.

1. Barry Horowitz
Look, even though I picked the Packers to lose in overtime to the Patriots, the three things I said that needed to happen for the Packers to win, did.

Rookie wide receiver Davante Adams finished with six catches for 121 yards. But even after his biggest game as a professional, he will be thinking about the one that got away.

I’m very happy Adams (and all of Packers Nation, for that matter) didn’t have to endure a heartbreaking loss under those circumstances, but it wouldn’t surprise me one bit if Adams woke up in a cold sweat early Monday morning thinking about that crucial drop on the goal line. Instead of providing his team with the dagger and being the lead story on Monday, he was almost exactly that for a very different reason.

At the end of the day, it’s a perfect character-building result for both the Packers and Adams. The kid had a helluva day and gave his team a boost, but he wasn’t flawless and can learn from this. And because of that drop, the Packers defense was given an opportunity to rise to the occasion and did just that.

Second, I said the Packers needed a big performance out of the offensive line and Eddie Lacy. CHECK

Eddie Lacy was his typical self, bowling and bruising his way through 21 carries for 98 yards and a healthy 4.7 yards per carry average. While Lacy was beastly as always, the Patriots did do a nice job of recovering and limiting the big running back after Lacy gained 37 of his yards on his first two carries. The offensive line proved adequate in the running game, but in the passing game they were epic. More on that later…

Finally, the third thing I said the Packers needed to do to win was perform well against the run. CHECK.

2. Blount Force Trauma
The reason the Packers performed well against the run wasn’t really because of anything Green Bay did defensively. In what would have to be considered the biggest surprise on Sunday, the Patriots refused to run the ball and test the Packers’ interior. Perhaps Bill Belichick and offensive coordinator Josh McDaniels thought throwing the ball was the best way to beat the Packers, but in my opinion they did their team a disservice by not pounding it more often.

Maybe LaGarrette Blount is a despicable human being and/or a locker room cancer who is prone to smoking fatties and walking off the field early. But don’t kid yourself. That man is a straight up stud. If you don’t believe me, go ask Morgan Burnett how he felt after Blount ran right over him like he wasn’t even there. This is not a knock on Burnett in any way. I think anyone who was in that spot was getting trucked.

Blount must be the most severe of head cases to be so obviously gifted yet jettisoned so frequently by teams. Have you ever seen a player with limited lifetime carries have more awe-inspiring runs than Blount? He’s unbelievable.

If the Packers and Patriots meet again in Arizona, my guess is the Patriots will run the ball a lot more than they did on Sunday. Blount finished the day with only 10 carries for 58 yards.

3. Players of the Game
The reason I didn’t get too into the way the offensive line played above is because, without question, these guys deserve a number on the list all their own. Bryan Bulaga, T.J. Lang, Corey Linsley, Josh Sitton, and David Bakhtiari played out of their collective minds on Sunday. The time Aaron Rodgers spent dancing in the pocket with a three-foot force field of protection around him was reminiscent of most of Tom Brady’s career.

If these five men can stay healthy and continue to play at the level they are or possibly keep getting better, this team can go all the way. This is the best stretch of offensive line play in Green Bay in a long time.

4. Tit For Tat
With the Packers leading 26-21 late in the fourth quarter, when Patriots’ kicker Stephen Gostkowski missed a 47-yard field goal attempt, it set off a celebration at Lambeau Field. It also set off a simultaneous explosion of joy and pain for people at Las Vegas sportsbooks. That’s because the Packers were 3-point favorites on Sunday and when that kick sailed well wide, all bettors backing the Packers were soon counting stacks.

Those who were on the Patriots were not so lucky. Some of them took to Twitter to complain that Gostkowski had cost them the spread. But of course, these folks are overlooking the fact that Mason Crosby missed a much easier kick earlier in the game. No harm. No foul.

The Packers covered. Deal with it!

“You bloody ask him.”

Sam Barrington stepped in for A.J. Hawk on Sunday and the results were outstanding. Barrington finished with five tackles, three of which were unassisted, a pass defensed, and one quarterback hit. That’s not a bad day for a guy just getting his feet wet against one of the best teams in football. What was even more impressive was how Barrington made back-to-back stops early on, and he was the one person all day who dropped LaGarrette Blount in his tracks.

The bulk of Sammy’s flash plays came in the first half and thereafter he wasn’t as easy to pick out. Still, he did a really nice job and if he can build off that solid effort, it would appear the Packers have bettered themselves once again at a position that was previously suspect.

6. Absolutley Jor-geous
How sick of hearing about Darrelle Revis were we with a couple minutes left to go in the first half? It was looking like the player formerly known as Revis Island had discovered the fountain of youth and was back in his prime. Jordy Nelson was getting zero separation and play after play, the physical Revis looked dominant.

Oh how one play can change things though. That’s the power and the beauty of Jordy Nelson. Revis played pretty near flawless ball all game long, but when Nelson beat him cleanly for his only big play of the game, he did enough to win that match-up against one of the best in the game.

7. Magic Mike
Mike Daniels might have only notched a half-sack and two solo tackles on Sunday, but he also registered three of the Packers’ six quarterback hits on Tom Brady. Also, what was so apparent throughout the whole game was Mike Daniels’ effort. All game long he was busting his ass and playing like there was no tomorrow.

Now, if only he can rub off some on Julius Peppers. Big Julie knocked down a couple passes, but other than that he went largely unnoticed. Well, except when he was giving a half-assed effort and letting Brandon Bolden slip right by him for an easy touchdown. We noticed that.

None of this is new. Peppers is known for taking plays off, but this is two games in a row where the big man was more or less invisible. Let’s hope he hasn’t hit the wall and his age is finally becoming a factor.

8. A Championship Level
Coach Mike McCarthy must be a top coach. He just has to be. I mean, why else would Bill Belichick take the time to wander the field and talk to him otherwise. Hmm? I’m stumped.

Yes, we can be a little hard on Mike McCarthy around here. We largely discuss and often criticize the parts of his job that we are able to see. What often gets overlooked though are all the things we don’t see. We don’t see what happens behind the scenes and the manner in which McCarthy manages the egos and keeps his team on point and so on and so forth.

There are so many things that don’t get talked about or mentioned because as outsiders looking in, we don’t even know what these things are. However, believe it or not, we are smart enough to know they are there and that Mike McCarthy is handling it. Both McCarthy and Dom Capers deserve a lot of credit for the job they did on New England.

But there’s a very good chance that the game on Sunday was merely the battle and not the war that has yet to be fought.

9. Bawling Brady
Holy F-bombs Batman! In my entire life I have never seen anyone unleash a barrage of F-bombs with as much ferocity as Tom Brady. That was quite an impressive little hissy fit from the prettiest quarterback in the game. I was expecting his head to explode at any moment. That would have gone SO viral.

But let’s be real. Tom Brady is a MAN and one of the best to ever lace them up. Respect.

10. Great win. Now move on.
The win versus the Patriots means nothing if the Packers don’t finish strong and either get a two-game edge on the Lions or beat them at Lambeau in the season finale. Our favorite whipping boys, the Atlanta Falcons, come to town on Monday night. Bring your hardhats.