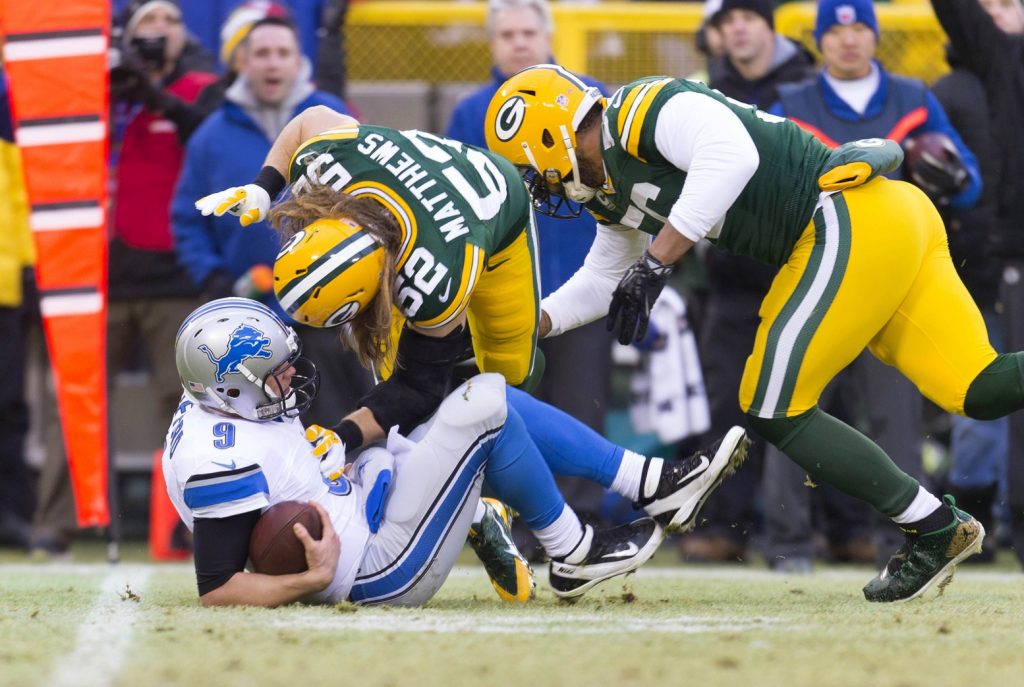 It was an honor and a privilege to be able to attend the game on Sunday, as it was one of the most sought-after tickets in recent Green Bay Packers history. The Packers took it to the Detroit Lions most of the day and came away with a solid 30-20 victory at Lambeau Field.

Here are the top 10 things that stood out in the game.

1. Thanks Sis!
As I wrote last week, anyone hooking me up with a ticket to the game secured themselves number one on the list this week. That honor goes out to my sister who somehow convinced her friend Terry to give up her season tickets for us in what turned out to be an awesome game.

Not only that, this was the first Packers game in roughly 30 years that I attended with my father. Although we were both caught off guard initially by the surprise and uncertain how we might handle the weather, it turned out to be a non-factor and we had a blast.

Thanks Jenny! You’re the best. I love ya!

2. Defer… Do you concur?
After winning the toss on Sunday, Packers coach Mike McCarthy finally decided to defer the decision to the second half. Although this didn’t appear to play much of a role in the outcome of the game, it was nice to see the Packers start with the defense on the field. I predict moving forward that the Packers will defer at every opportunity.

3. Why he’s not a captain?
As the Packers defensive starters were introduced before the game Sunday, every Packers player ran out of the tunnel wearing his helmet, looking like he was ready to take the field. Everyone but Clay Matthews that is.

Matthews ran out without his helmet on, probably so everyone could get a look at his flowing mane blowing in the wind. To me this is a not a representation of a team move. This is someone who thinks he’s different or more special than those around him and wants all eyeballs on him as an individual, rather than a part of a team. Since I’m not at games very often anymore, I don’t know if this is something he does every game, but I absolutely hate it.

Although he’s a beast on the field, he also balked slightly at playing inside linebacker because it would affect his sack numbers. Many people were surprised when Matthews wasn’t named one of the team’s playoff captains, but maybe there is a reason for that.

4. Okay, he’s forgiven.
After Matthews sacked quarterback Matt Stafford on the Lions’ first third down of the game, I was able to get over the fact that he ran out of the tunnel without his helmet on.

It doesn’t mean it wasn’t a D-bag move though.

5. A First Series Trend
Have you noticed how effective the Packers running game seems to be on the first series of most games, only to regress and be average or slightly below the rest of the game?

On Sunday versus Detroit, Eddie Lacy rushed four times for 37 yards on the opening possession, starting with his first carry that went for 22 yards. In that first possession, Lacy averaged over nine yards a carry, but for the rest of the game he had 21 carries for 63 yards, a three-yard average.

6. Eenie, Meenie, Cobbie, Hyde
Micah Hyde kicked off the Packers scoring on Sunday with a 55-yard punt return. How was he rewarded for his fine effort? He received a spot on the bench as Randall Cobb fielded the next punt. This has been the trend all season, as Hyde and Cobb alternate every other one. Why? I have no idea.

Not only is Cobb one of the Packers most valuable offensive assets, which the team can’t afford to lose, simply put, he’s not as good as Hyde on punt returns. In fact, in Hyde’s very short two-year career, he already shares the Packers franchise record for most punt returns for a touchdown with three.

This presents another interesting question: Why was Randall Cobb named a special teams captain for the playoffs when he’s a part-time punt returner who happens to be the second best on the team?

7. Clay Back on the Shit List
Let’s face it, Clay Matthews is a baller and a huge part of the Packers’ success this season on defense. The moment the Packers moved Matthews to the inside, the defense has been much more stout versus the run. A lot of that has to do with The Claymaker.

But man oh man did he look bad on one particular play on Sunday. Although on said play, it certainly appeared he was being held, Matthews literally quit playing and looked to the referee for a flag. He acted as if everything stopped as he abandoned ship and his teammates in the middle of the play and walked towards the official while flailing his arms around.

The problem was, there was no flag and Matthews could have made a tackle if he wasn’t so busy whining. That is simply uncalled for and unacceptable behavior from a player of his caliber.

8. Captain Morgan
Morgan Burnett got the shaft last week and didn’t make the list. That was an oversight, but not this time. Burnett tied for the team lead with seven tackles and came up with several other big plays, most notably a beautiful pass break-up down the left sideline versus Lions’ tight end Eric Ebron.

The season started out with Burnett not playing well, as rookie Ha Ha Clinton-Dix stood out, but Burnett has come on as the rookie has regressed some. Clinton-Dix hasn’t really flashed much as of late, but he hasn’t been a massive liability either. Hopefully both starting safeties are at their best for the second season coming up.

9. Mighty Casey
Although Micah Hyde kicked off the Packers scoring with his brilliant punt return for a touchdown, he was relieved by Casey Hayward in the nickel and that proved to be a great move. Hayward was all over the field making impact plays and finished with an impressive line of four tackles, one of which was for a loss, and two passes defensed, one which should have been intercepted.

10. Let’s Get Healthy
With the Packers securing the number two seed in the NFC, the waiting game begins. Will Aaron Rodgers be able to go? If he can go, will he be at 100 percent?

Ehh. Let’s not worry about it for now and let’s enjoy this one for the moment.

Happy New Year everyone! Have fun, be safe, and thanks for reading.