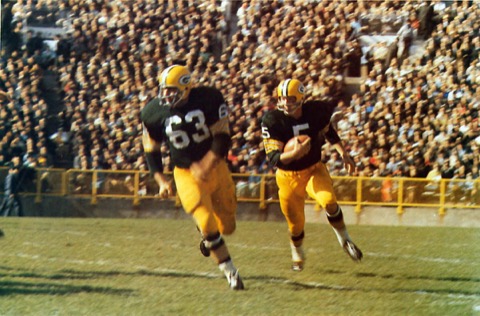 The Green Bay Packers lost more than a game on Sunday. They lost a character. Former guard Fuzzy Thurston passed away at age 80.

He died after a long battle with cancer and complications of Alzheimer’s disease.

For people of a certain age, Thurston will be remembered as a guard on Lombardi’s Packers of the 1960s. He teamed with Jerry Kramer on the vaunted Packers sweep that opened so many holes for the likes of Jim Taylor and Paul Hornung.

Thurston, whose given name was Fred, was a first-team All-Pro in 1961 and is a member of the Green Bay Packers Hall of Fame.

He won six championships — five with the Packers and one, in 1958, with the Baltimore Colts, who he played one season for before being traded to his home state Packers.

Now, if you’re my age and a Wisconsin native, you remember Thurston for something else entirely. Sure, I was aware that the guy actually played for the Packers during the 60s glory years, but to me he was more the old timer on TV with the gravelly voice sitting down at Fuzzy’s Bar.

Of course, he owned Fuzzy’s Bar, which was close to Lambeau Field.

Local news needs someone to talk Packers? Get over to Fuzzy’s and see what Fuzz has to say!

He always had plenty to say and he always said exactly what he felt in that gravelly tone, which was a result of his first bout with cancer in the early 1980s.

Thurston would eventually lose his life to a second bout with cancer, this time in his colon. He had been battling the disease, along with dementia, for the past three years.

Thurston was a Wisconsin original. He was, after all, the guy who, when asked how he stayed warm for the Ice Bowl, answered that he drank about 10 vodkas.