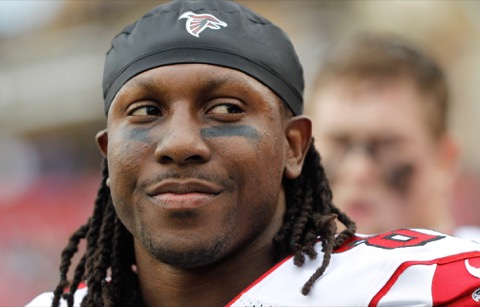 The Atlanta Falcons are a crappy football team, which their 5-7 record indicates.

However, the division they play in is even crappier. With the New Orleans Saints getting blown out by the Carolina Panthers on Sunday, no team in the NFC South has more than five wins. So right now, the Falcons have the best record in the NFC South.

At least until they play the Green Bay Packers this evening.

Even if they lose, the Falcons will still be in first place in the NFC South. They’re essentially in the playoff picture because some shitty team has to win that shitty division. A lot of people think that’s a joke.

The Atlanta Falcons — specifically, receiver Roddy White — wants you to feel sorry for them. Not because they suck at football, but because people think they’re a joke.

“I’m upset because I just hear all the comments about us and our position and our division,” White told ESPN.com. “Like no one has won a division going 8-8 or 7-9. When the Giants won the Super Bowl [in 2011], they were 9-7 going in and they barely got into the playoffs.

“It’s like everybody wants to be mad at us because we’re in the position that we’re in and other guys are winning games and they have better records than us. Don’t nobody complain when other teams do it, so why such a big deal now? It pisses me off because it’s not fair.”

I think I’ve said it before and I’ll say it again right here. Fuck these clowns.

First of all, a TON of people complained when other teams with losing records made the playoffs. This is no different. This same dialogue is repeated every time a team with a losing record gets in. The chief commentary is that the seeding structure needs to change.

And nothing ever changes.

The NFL does nothing, once in a while a shitty team makes it in and a lot of people complain.

We just feel so terrible about the plight of this awesome team and wonderful organization. Please treat them accordingly this evening, Green Bay.