by Monty McMahon
in Uncategorized
63 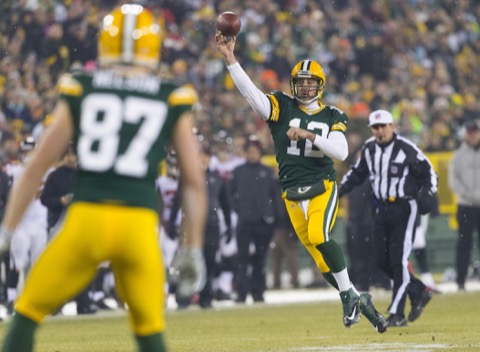 The Green Bay Packers are now 7-0 at home this season and their latest win came the way the majority of those wins have — in dominating fashion. When it was over, the Packers handed an overmatched Atlanta Falcons a 43-37 loss.

While that score looks close, the game never really was. After the Falcons tied the score at seven in the first quarter, the Packers ran off 24 unanswered for a 31-7 halftime advantage.

The margin proved to be more than enough for a Packers offense that continued to hit on all cylinders, even while the defense was doing its best impersonation of the 2011 unit.

And while you’d think we’d also have to praise Falcons quarterback Matt Ryan, he only threw the ball to Jones. No other Falcons’ receiver had more than 42 yards receiving.

That says something about the ineptness of the Packers defense. They knew who was getting the ball and they wouldn’t or couldn’t do anything to stop it.

Cornerback Sam Shields, who was returning from a concussion, was largely to blame. He looked like he either didn’t care or was still concussed. His mate, Tramon Williams, who had no excuses, was pretty awful as well. It’s almost as if Father Time suddenly caught up to Williams.

Nonetheless, that shitshow wasn’t enough to derail the Packers.

The rest of the defense played well enough. The Packers gave up only 91 net rushing yards and limited everyone not named Jones.

The parts you expected to work just fine for the Packers, worked just fine too. Those parts start with quarterback Aaron Rodgers, who was his usual impeccable self, throwing for 327 yards, three touchdowns and no picks.

Jordy Nelson came through with another big game, catching eight for 146 and a touchdown, which went for 60. Eddie Lacy also turned in a solid effort, with more than 100 yards from scrimmage — 73 rushing and 33 receiving — and two touchdowns.

In the end, the Packers’ win allowed them to keep pace with Arizona for the best record in the NFC. It also allowed them to remain a game ahead of the Detroit Lions for the NFC North lead.

Three games to go before a playoff run.