Oh, What Could Have Been, Chicago 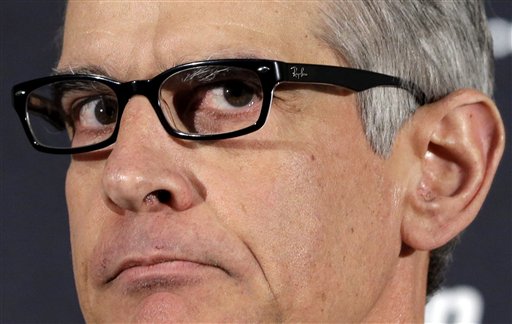 Certain things have come to light with the Chicago Bears dismissing coach Marc Trestman and GM Phil Emery this week.

One of them is that Emery is a real buffoon.

Not so much like his predecessor Jerry Angelo was a buffoon. Angelo, you’ll remember, was the guy who went and got Jay Cutler and then refused to give him any offensive linemen or receivers who were worth a shit. In hindsight, that Cutler move doesn’t look all that great either, but I digress.

No, Emery actually made some decent personnel moves. He’s a buffoon for his handling of the coaching staff.

Obviously, Emery eventually hired Trestman, who gave him an 8-8 season followed by a 5-11 season.

When you look at that by itself, it looks terrible. The guy Emery fired — Lovie Smith — had just led the Bears to a 10-6 season. They didn’t make the playoffs, but then, they weren’t going backwards either.

The decision looks even worse when you consider who Emery passed over to hire Trestman.

As we mentioned on Monday, the top candidate was Bruce Arians, who was the reigning coach of the year. He got hired by Arizona, where he’s led the Cardinals to a 10-6 season, followed by an 11-5 season.

We knew that. We didn’t know exactly how it went down though. Apparently, the dysfunction that was so obvious this year, started right back when Emery came onboard.

The Bears were also considering Seattle offensive coordinator (and Badger great) Darrell Bevell for their head coaching job. Emery enlisted Rod Marinelli, who had agreed to remain on staff to coach the Bears defense under the new head coach, to evaluate the candidates.

But back in mid-January 2013, as part of their final selection process for a head coach to replace Smith, Emery and the organization had Marinelli interview the three finalists for the head-coaching job.

Marinelli was asked to rank the three. He did. Arians was his runaway first choice; Bevell was the second; Trestman was a distant third.

When he learned of the decision, Marinelli abruptly angrily resigned and left Halas Hall for Dallas and a de facto demotion to defensive line coach.

So would the Bears have been better off with Arians?

Mostly, I’m glad we didn’t have to find out. They honestly probably would have been better off keeping Lovie, but we’ll never know that either.

Instead, we got two years of wonderful, laughable Chicago Bears dysfunction and implosion. Courtesy of Phil Emery.