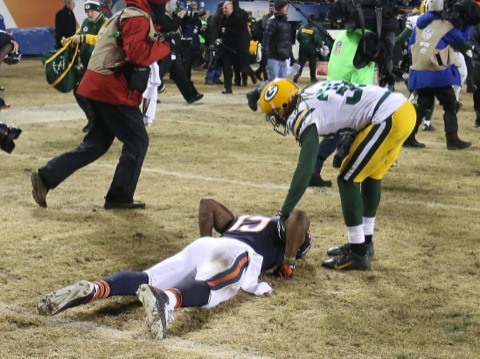 Yeah, we’ll get back to the Green Bay Packers soon enough, but let’s take a moment to revel in the fact that the Chicago Bears (still) suck.

They’re 5-8, their season is over for all intents and purposes, and wrists are being slashed all over Chicago.

Remember, down the river, not across the street.

Anyway, we just wanted to take this space to recount the latest batch of misery for the Bears. Here ya go!

1. AIDs patient and Bears coach Marc Trestman, who probably won’t have a job much longer, is sticking with Jay Cutler as his quarterback. Totally going down with that ship! And that’s swell, but the Bears front office is said to have a case of buyer’s remorse with Cutler, who they laughably gave a seven-year, $126.7 million contract last offseason. That includes $54 million guaranteed.

It gets better. Receiver Brandon Marshall can totally understand how those clowns in the front office feel.

“That’s tough, man,” Marshall said. “What I would say is we all know Jay is more than capable of getting it done. It doesn’t always fall on him. I guess that’s why those guys are the highest paid players out there. Because when you win and everything is going good, they get all the glory. And when it’s bad, they take more than what they should take. But I can understand that as far as as a business man, I would have buyer’s remorse, too.”

I’ll tell ya what’s tough — when your No. 1 receiver publicly states that he doesn’t think his quarterback has played well this season.

That’s one of the reasons why Monday Night Football sucks. Shitty match-ups that cannot be altered. What should happen, Brandon?

“Yeah, they should take us both off ‘Monday Night Football’ right now,” Marshall said.

It’s unfortunate that that can’t happen, probably mostly for the NFL. I know I’m not watching and I’m not sure who else would.

3. It’s blame season in Chicago and there’s a lot to go around. Here’s Bears beat writer Jeff Dickerson, whose lifeless body we will probably find hanging from a beam in his apartment next week, blaming ownership.

The Bears have now missed the playoffs seven times in the past eight seasons. When a charter franchise of the National Football League reaches the postseason as infrequently as teams such the Jacksonville Jaguars (also one postseason berth in eight years), the problems run deep. Since the Bears fired Ditka as coach at the end of the 1992 season, the club that resides in the NFL’s second largest media market has qualified for the playoffs a grand total of five times. And people wonder why the 1985 Bears are treated like rock stars to this day. At this rate, Chicago will be celebrating the 40th anniversary of Super Bowl XX before the Vince Lombardi Trophy returns to Halas Hall. The Bears are going backward. This is easily the worst season of Bears football since Lovie Smith’s first year in 2004 (5-11). The difference is Smith’s team 10 years ago had zero expectations. The 2014 Bears were supposed to be contenders. Instead, fans are forced to watch the club simply play out the string. Blame whomever you want, but the real problems originate at the very top. What else needs to be said?

If you’re going to be thankful for anything this holiday season, be thankful you’re not a Chicago Bears fan.