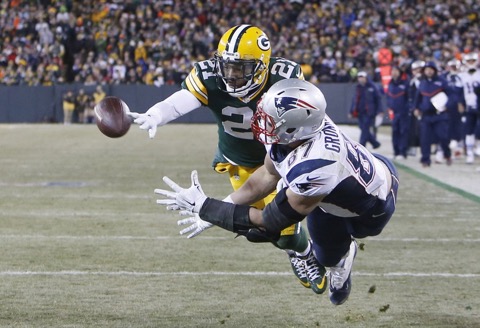 The guy has 70 tackles and a pick in his rookie season. Perhaps more importantly, he’s added some toughness to the Packers defense and made it more flexible by freeing up Morgan Burnett.

This past Sunday, Clinton-Dix was again impressive. Not so much in a statistical sense, but more so in what he was asked to do and how he performed.

Clinton-Dix was one of the Packers defensive backs asked to cover Patriots tight end Rob Gronkowski, who is not only the best tight end in the league, but also probably the toughest match-up of any pass catcher.

As we noted yesterday, the Packers didn’t exactly shut Gronkowski down, but they did enough to limit him. Most importantly, he didn’t get in the end zone.

The one time he came close, Clinton-Dix was there to knock the ball out of his hands.

“Tom (Brady) just threw it up,” Gronkowski said. “It was a fade route. I tried to go up and make a play. I went under it. I am pretty sure I caught it, but at the last second (Clinton-Dix) made a nice play and hit it out of my hands. It was a good play by him.”

That play obviously could have changed the game if Gronkowski had made the catch. Instead, we’re talking about a big win for the Packers and a rookie with an awful lot of confidence.

“It gives me a lot of confidence,” Clinton-Dix said. “I just want to keep making plays, and continue to make this defense better. … It’s amazing just to come out with a win against a guy like Tom Brady. He’s one of the greatest in the business right now. Just to have all the weapons he has one offense, to come out with a win is a great thing.”

Of course, he also took some lumps battling a guy who’s 6-6, 265 and built like a brick shithouse.

I will never try and hit @RobGronkowski up high again. #RESPECT #sore

Previous Article
McCarthy Doesn’t Like Those Personalities
Next Article
Stream of Consciousness: Taking Down the Patriots Edition