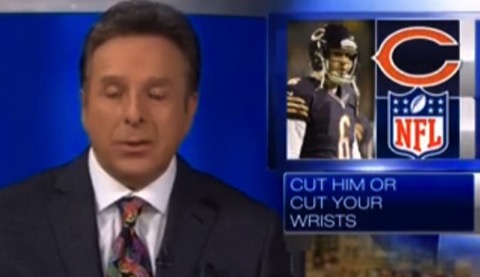 And what a season it was. Unfortunately, the Season of Cutty! is over.

The Chicago Bears have benched the greatest quarterback and don’t-care lifestyle advocate ever, Jay Cutler.

What do you think Cutty’s reaction was? Go ahead and take a guess.

The Bears will now turn their fortunes over to Jimmy Clausen.

Jimmy Clausen. This doofus was a second-round pick of the Panthers out of Notre Dame back in 2010. He impressed them so much in his one season as a starter that they went and drafted Cam Newton the very next year. Clausen spent two seasons on Carolina’s bench and then 2013 out of football entirely.

That’s when the Bears showed up and were like, “Clearly, everyone else in the league was wrong about this guy and since we are phenomenal at finding and developing talent at the quarterback position, we are totally gonna outsmart everyone once again!”

And outsmart everyone they did. Just like they always do.

They were merely hiding the great Jimmy Clausen on their bench only to unleash him upon us in the 16th week of the season. After we had witnessed Cutty! take quarterback play into a new pantheon of greatness, we would finally get to witness the next evolution of the game.

No. The next evolution of mankind.

His name is James Richard Clausen.

That is not to say that our hero, the great and wise Cutty!, did not go out with a bang as only Cutty! could.

Prior to the glorious Season of Cutty! coming to an end, ABC 7 sports anchor Mark Giangreco had a tremendous on-air freakout. You see, he’s mad as hell and he’s not going to take this anymore.

He started with the hot “fire everyone” take we’ve been hearing a lot of lately.

“The McCaskeys have to fire everybody and cut the quarterback,” Giangreco said. “But they won’t and can’t so they might as well just sell the team to some jamoke who will move it to L.A.”

Oh, he also rolled out the graphic at the top, which asked the Bears to cut our man Cutty! or cut their wrists.