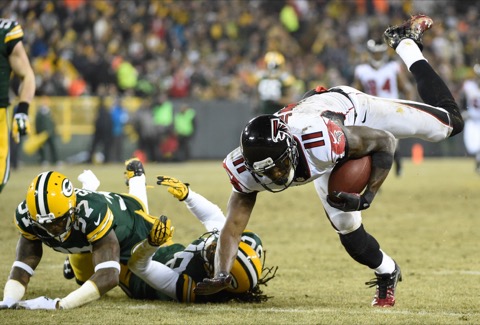 Because that’s how many there are in a football game and there’s plenty of speculation that the Green Bay Packers only played two of them last night.

Of course, there’s the evidence too.

The Packers staked a 31-7 halftime lead over the Atlanta Falcons, Monday night. That sort of first-half performance has become customary in Green Bay this year. So apparently, some guys thought the Falcons would just mail it in in the second half, much like the Eagles and Bears did before them.

Not so. The Falcons, who are kind of like that annoying prick at your party who just HAS to be the last one standing, decided they were going to put up 30 points in the second half. And let’s be honest, the Packers defense — especially the secondary — was more focused on getting over to The Oval Office than they were on playing ball.

“There may have been a slight relaxation there at halftime up 24,” quarterback Aaron Rodgers said. “Occasionally that can be the natural thing.”

Natural or not, a similar second-half letdown hasn’t happened in the team’s other home wins this season. Of course, none of them have followed an emotional victory like the one over the Patriots. Perhaps it was inevitable.

And perhaps we have to thank the Falcons for being so shitty that the Packers could suffer a letdown game and still win.

However you want to look at it, Buffoon not happy.

“Maybe I need to go back and look at what was said at halftime,” head coach Mike McCarthy said. “We haven’t played four quarters here in a while and we clearly didn’t show up for four quarters in several parts of the game.”

Well, you kind of played four quarters the week prior to this past one. You know, when you beat the Patriots?

Whatever, though! You get those boys refocused!