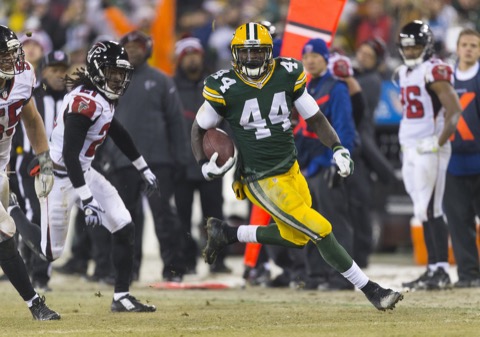 The score looks close, but the Green Bay Packers were never really in trouble against the Atlanta Falcons.

We’re going to put our dreams of another championship parade on hold for now though. The defense that was played by the Packers on Monday night was nowhere near championship caliber.

We’d advise you to do the same.

Here are five more thoughts on the win.

We may as well start with that defense
We mentioned this last night. The Packers were pretty good in most areas of their defense against Atlanta. They held the Falcons to 91 yards rushing. Safety Morgan Burnett got his first interception since 2012. Clay Matthews and Sam Barrington looked solid in the middle. The Packers held every Falcons receiver not named Julio Jones in check. And there’s the problem. Julio Jones, 259 yards.

There’s really no explanation for this. It’s not as if Jones accrued that yardage total by making spectacular catches in tight coverage. It looked more like he had a three-yard forcefield surrounding him at all times that the Packers’ cornerbacks couldn’t penetrate. Jones was wide open time after time and then he’d catch the ball and run and run and run. I don’t recall seeing Sam Shields and Tramon Williams play a worse game than they did on Monday. Tramon had some garbage performances when he was dealing with that shoulder injury a couple years ago, but there was usually someone there to pick up the slack. On Monday, Tramon was bad and Shields was worse. Not until the Packers tried Davon House on Jones did we get a hint that he could be stopped.

Suddenly, that season-ending match-up with the Detroit Lions and a healthy Calvin Johnson is a lot more worrisome.

A.J.’s role
As expected by most, linebacker A.J. Hawk played sparingly for the second week in a row. We noticed him on the field twice, but he was obviously out there a little more than that because he had two tackles. The Packers will give you a bunch of mumbo jumbo about playing the match-ups and how Hawk still has a role in the defense.

He does have a role in the defense and I’ll tell you what it is — backup inside linebacker.

Welcome back, Jimmy!
James Starks, the Sweathogs have missed you. You probably forgot this guy was on the team because the Packers have barely used him since the first half of the season. Well, they used him on Monday night and for more than just running straight into a pile of bodies in garbage time. Starks got 10 carries, which is the most he’s had since week 5. He turned those 10 carries into 75 yards and a touchdown. He also caught two passes for 26.

Davante isn’t there yet
Receiver Davante Adams had his breakout game against the Patriots, topping 100 yards for the first time in his career. How did he follow that up? One catch for six yards. Typical rookie receiver. There’s a little more at play here though.

Maybe, maybe not. He did it against the Patriots, but went right back to looking like a clueless rookie against Atlanta.

Remember when PATs were automatic?
Not this season! If memory serves, the Packers have now failed to convert two extra points this season. On Monday night, Mason Crosby had one blocked.

Blocked! I don’t know if that’s worse than outright missing one or not. The bottom line is, extra points shouldn’t go unconverted at all.